Popcorn Frights Film Festival presents the very best genre films from across the world as it celebrates the art of horror. The Festival is South Florida’s first and only horror film festival, with its second annual event taking place August 12-18, 2016 at Miami’s landmark O Cinema Wynwood theater.

Popcorn Frights prides itself on premiering films from emerging and established filmmakers enabling the industry and general audiences to experience the power of storytelling through genre film. 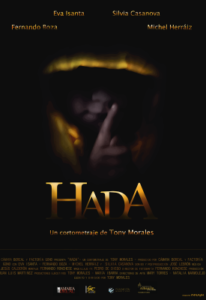 Tonight Hada comes to visit Daniel because his last baby tooth has fallen out. What Daniel doesn’t expect is that his worst enemy is the light.

FLORIDA PREMIERE. Those cracks in the ceiling are hiding a lot more than dry rot in Under the Shadow, an astonishingly tense and atmospheric thriller set in a haunted Tehran apartment during the terrifying final days of the Iran-Iraq War. A grim allegory of female oppression, this brilliant feature debut grounds its premise in something ineluctably sinister: imagine a cross between The Babadook and The Conjuring and you’re halfway there. Set in 1988 Iran, a mother trapped in her apartment during the chaos of the war worries that malevolent spirits have taken possession of her daughter, leading to a bone-chilling horror tale of paranormal and real-life terrors.

A bullied teenager, fearing for his life, turns to an ancient creature of the forest for protection…and revenge.

FLORIDA PREMIERE. Just imagine if David Cronenberg slipped into a fever dream while binge-watching Dexter, Fargo, and Six Feet Under, in one go, and you’ll have just a shade of what I Am Not a Serial Killer has on offer. A darkly heartfelt, astonishingly foreboding, and imaginatively sinister tale of a likable teenager (Max Records of Where the Wild Things Are), raised by a mortician family, whose own nascent sociopathic tendencies make him a perfect amateur sleuth when a serial killer strikes his folksy Midwestern town. Take it from us, the film is far, far more unique and fantastically bloody than the premise might imply, helped in no small part by an Oscar-worthy performance by Christopher Lloyd (Back to the Future).

The biggest, boldest, and sexiest operatic flash mob the internet has ever witnessed!

FLORIDA PREMIERE. When a high-school cheerleader accepts a date from the football team’s star quarterback, a grisly manifestation of her own bodily insecurities pushes her into a self-destructive nightmare.

FLORIDA PREMIERE. What if the Dude from The Big Lebowski somehow ended up in David Cronenberg’s The Brood? Danny Perez’s nightmare fuel film strangely answers this long thought question by mixing one part horror homage and three parts anti-drug PSA with an offbeat kickass cast in a story that includes a monster pregnancy, alien abductions, covert operatives, and dynamite performances from Natasha Lyonne (Orange is the New Black) and Chloe Sevigny (American Psycho).

FLORIDA PREMIERE. With the ability to travel in time, a lonely girl finds love and comfort by connecting with her past self. Eventually faced with rejection she struggles with her identity and gender, and as time folds onto itself only one of them can remain. Featuring original music by Flying Lotus.

FLORIDA PREMIERE. In this astonishingly beautiful and mesmerizing blend of body horror and surreal fantasy, a young boy living in a mysterious, isolated seaside clinic uncovers the sinister purposes of his keepers. Evocative, enthralling and unnerving in equal measure, Evolution is a provocative fairy tale that beckons you deeper and deeper into an unforgettable domain filled with stunning cinematic imagery and stylistic nods to David Lynch and David Cronenberg that will seduce and repulse in uncanny harmony.

FLORIDA PREMIERE. For gorehounds who like the early films of David Cronenberg (spotlight Scanners) but secretly wish their themes and subtext didn’t get in the way of the exploding heads, Joe Begos’ The Mind’s Eye presents a mainlined shot of hyper-violent-telekinetic-carnage that you won’t soon forget. Pitting telekinetic savants against a mad doctor keen on siphoning their power, this giddy ’80s throwback stages a psychic war zone complete with bulging cranium veins, exploding heads, and a visceral kick of brainiacs willing each other into mind-melting, bloody oblivion. Cronenberg, Carpenter, Romero can all be found in the cinematic impulses of this unrelenting scream fest.

FLORIDA PREMIERE. A young priest is sent to a remote island off the Irish coast to help protect an estranged fishing community from dark supernatural forces but nothing is as it seems.

NORTH AMERICAN PREMIERE. In this supernatural horror thriller, a brutal serial killer is finally gunned down in the middle of carrying out one last heinous act of bloody murder. In the maniac’s possession is a box of Guatemalan talismans, which mistakenly end up being sold as charm jewelry in a thrift shop. Soon those who bought the ‘worry dolls’ begin to act strange and unleash a plague of mindless slaughter and carnage.

The complete festival schedule, badges, and tickets can be found at PopcornFrights.com.