Marking its 12th year showcasing some of the best in independent and international horror; the FREAK SHOW is rapidly gearing up to be another fear-tastic viewing season. Specializing in the debut screenings of a select variety of Super Shorts, Shorts, and Features submitted from around the world and it is not slowing down. In additional to those categories, we’re excited to announce the inclusion of Student Shorts to this year’s viewing line-up. This new category urges student filmmakers to enter their works of art, vying for a chance to win the coveted “FREAKY” Award.

We are calling all Horror Freaks, Fans, and Filmmakers to attend! Be sure to kick start your early Halloween festivities by attending the original FREAK SHOW Horror Film Festival, presented by Fear Film Studios on Friday, October 13th – 15th, 2017 at the Premiere Cinema Theaters 14 located inside the Fashion Square Mall in Orlando, Florida.

The event will be hosted by Syfy Channel’s very own Scott Tepperman from Ghost Hunters International. He is returning for his second year of hosting the festival and we couldn’t be more excited!

In addition, this year’s show opens on Friday the 13TH! So what better way to start the festival off then by offering an Exclusive Opening Night Screening of “Friday the 13TH”! So don’t miss your chance to experience the fear all over again on the big screen! Get you tickets today as seats are limited!

Film Festival Weekend Badges and Friday the 13th Movie Tickets are currently on sale at www.freakshowfilmfest.com/festival-passes-tickets/. Individual film tickets will be available by the end of September 2017. They will be both online as well as the Premiere Cinemas Box Office.

The FREAK SHOW Horror Film Festival is proud to announce the following films have been selected to play at the festival. (*This is the first round of our 2017 Official Film Selections) 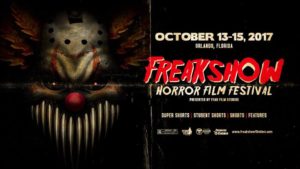 FRACTURED (UK) 2017 (*World Premiere)
Directed by Jamie Patterson
Description: When a tire blows on the way to a romantic countryside getaway, Rebecca and Michael sense someone is watching. The only people they encountered along the way were friendly strangers Freyr and Alva who gave them a lift. But their holiday home becomes a terrifying prison as they are tortured by something or someone outside.

3 DEAD TRICK OR TREATERS (Canada) 2017
Directed by Torin Langen
Description: After stumbling upon the graves of three murdered trick or treaters, a small town paperboy discovers a series of handwritten horror stories tacked to the children’s headstones. Penned by a deranged pulp author driven mad by his craft, the stories chronicle grisly tales of Halloween rites, rituals and traditions. Absent of dialogue and heavy on atmosphere, 3 Dead Trick or Treaters is a horror chiller unlike any you’ve seen before.

HOSTILE (France) 2017 (*East Coast Premiere)
Directed by Mathieu Turi
Description: Juliette, a lone survivor of an apocalyptic era, fights to survive against hunger, thirst, a broken leg and strange disturbing creatures that only come out at nighttime.

I WISH, I WISH (Mexico) 2017 (*USA Premiere)
Directed by Eduardo M. Clorio
Description: 5 cousins discover a diabolical game that meets your deepest desires, they just have to be prepared to lose the most valuable things in their lives.

THE CALL OF CHARLIE (USA) – http://freakshowfilmfest.com/portfolio/the-call-of-charlie/

THE MADAME IN BLACK (Sweden) – http://freakshowfilmfest.com/portfolio/the-madame-in-black/

Festival screens at the PREMIERE CINEMAS 14 near the heart of Downtown Orlando, Florida. For more information, visit www.freakshowfilmfest.com

Get your tickets for The FREAK SHOW Horror Film Festival here: https://freakshowfilmfest.com/festival-passes-tickets/ Also don’t miss our Exclusive Opening Night Screening of “Friday the 13TH”, get your tickets today for this limited screening!

Now in its 12th year, this international horror genre film festival is the brainchild of FEAR FILM Studios Owner Robert J. Massetti. As a veteran of the industry, Robert wanted to make a film festival that celebrates independent horror by giving the artist a forum to show his or her films.

This 3 day showcase highlights the most talented filmmakers from around the world. Its primary focus is to help filmmakers reach their true creative potential by opening up networking and visibility across the industry. The Festival screens at the PREMIERE CINEMAS 14 near the heart of Downtown Orlando, Florida. For more information, visit www.freakshowfilmfest.com