Following sell-out success and wide acclaim for their previous productions at the London Horror Festival, ‘The Puppetry Of Flesh’ and ‘What Monsters Do’, horror theatre company and previous LHF producers Hidden Basement Productions return to the stage once again this February with their most recent smash hit – the darkly comic retelling of the HP Lovecraft classic horror novella ‘The Shadow Over Innsmouth’ for the first ever London Lovecraft Festival at The Etcetera Theatre, Camden.

Originally devised and directed by Philip North and Jade Allen, the production has been met with rave reviews at the London Horror Festival 2015 & 2017 and at the Black Box Festival 2016.

“An excellent night out with great performances and a witty script, I give ‘The Shadow Over Innsmouth’ a big 666/666! Probably the most fun you can have while waiting for your fishy overlords…” – Horror Hothouse

“Whimsical, funny and entertaining. Remarkable comedic timing, fast paced and engrossing. ‘The Shadow Over Innsmouth’ is a lively off-beat comedy-horror show that manages to unsettle and amuse in equal measure.” 4**** – London Pub Theatres

“Charming, fun and entertaining…This fishy adventure is splashed with humour and drowning in a shoal of characters” – Scatter of Opinion

Philip North returns to direct and perform in this re-worked and developed production and is joined by fellow Hidden Basement company member Claire Matthews.

Set in the ancient sea port town of Innsmouth in 1920’s, the story tells of one man’s terrifying and disturbing journey as he explores his family history and encounters a malign undersea civilisation.

The script is partly based and adapted from the original text from HP Lovecraft, but North adds the additional storyline of the principal character’s fears of marriage, mental and physical illness and race, providing a commentary of Lovecraft’s own fears and political views at the time.

On a frankly tedious architectural tour of the coastline, Robert Olmstead happens across the ancient seaport of Innsmouth…
What he discovers there will threaten his life, test his will and shatter his sanity.
Join us to explore the complex and sometimes deadly relationship between man and fish…

Hidden Basement Productions are a theatre company specialising in horror. Their first play ‘The Puppetry of Flesh’ was premiered at the London Horror Festival 2012 and was a sell-out success. This was followed closely by the double bill ‘What Monsters Do’ at the London Horror Festival 2013, a collaboration with horror icon and festival patron Nicholas Vince. Nicholas, well known for playing the Chatterer Cenobite in Clive Barker’s ‘Hellraiser’ and ‘Hellraiser II: Hellbound’, worked with Hidden Basement Productions to bring two dramatized short horror stories from his collection ‘Tunes from the Music Hall’ and ‘Green Eyes’ to the stage.

Hidden Basement Productions went on to take over as producers of the London Horror Festival in 2014 and 2015, before starting work on their current project.

Philip North’s theatre credits as co-writer and director include ‘Madame Everleigh’s Love Emporium’ and ‘The Untimely Death of Mr String’ for the Raven Theatre Company, ‘Piercing the Veil’ – an original radio play for the Hellraiser Podcast, ‘The Puppetry of Flesh’ and ‘What Monsters Do’ for Hidden Basement Productions. 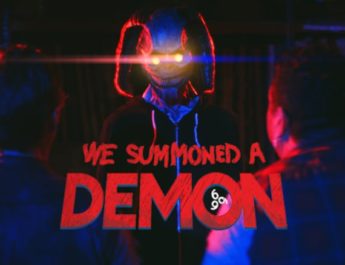 Sunday Scares: “We Summoned A Demon”