The hits keep coming as we fire out our onslaught of Women In Horror Month MASSIVE Blood Drive PSAs from our outstanding contributors. This year we’re releasing a new on every day as we have an incredible 30 filmmaking teams from all around the world taking part!

Next piping hot slice of awesome: “It’s In You To Give” by Ama Lea

Ama Lea grew up in Stephen King Country- Bangor, Maine where she naturally had an inclination to the horror genre from a very early age. She spent her youth making films on old Camcorders, editing between VCRs and taking pictures in cemeteries.

After High School Ama moved to Boston where she majored in editorial photography at New England School of photography. She was Valedictorian of her graduating class. Soon after which she attended grad school at Brooks Institute in Santa Barbara, California where she majored in Fashion Photography and Film Studies. She was again, Valedictorian. After college she went on to become a celebrity photographer for many top magazines such as Inked, AP, Revolver, Zink and many more. She worked within the horror industry shooting a fine art photo exhibit entitled The Bloody Best which included portraits of legends in the horror industry which lead to her accepting the position as photographer for Fangoria Magazine where she had the honor of shooting the likes of Roger Corman, Wes Craven, and many more. She went on to create Year of Fear, a sexy parody horror calendar company that releases products annually. Meanwhile she kept her toe in film making by writing and directing several shorts and participating in ABC’s of Death 2.5 for Alamo Drafthouse as well as just finishing a huge festival season with her award winning short film, From Hell She Rises.

Ama is currently working for various publications as an editorial and celebrity photographer.

When asked to be a part of the Soska’s annual blood drive, I was honored! It’s a great cause that’s been a tradition for women in horror and the Soska’s for years. I began to think about the theme…”be a hero.” Obviously capes and tights come to mind first but breaking it down to something even more simple. A hero in your life every day. To me, there is something so heroic about giving your all to another person. So many men have zero idea how to really be a great partner and furthermore, a great lover. To me the ability to give unselfishly to another person is heroic and it’s the same as giving blood. The simple act of donating blood can help save lives. Nearly 4.5 million patients need a blood transfusion a year in the US and Canada alone and only 10% of the population donates per year. If we could increase that number by even 1% the blood deficit in America would disappear. This is a call to arms for the horror community. It’s in all of us to give! 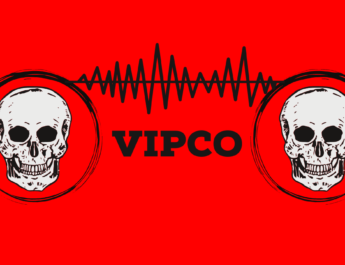 THE OMEN Meets Insidious in THIS IS OUR HOME, Out this December