GRIZZLED! An action/adventure creature feature spoof of the nature-run-amok genre.

Three forest rangers and a grizzled hunter play cat and mouse with a giant mutant penguin as they attempt to rescue the President’s lost daughter on the 4th of July.

GRIZZLED! is a love letter to and a spoof of the nature-run-amok genre, particularly the films of the 1970s. It was most inspired by and is a loose parody of four movies: Jaws, John Frankenheimer’s Prophecy: The Monster Movie, and two films by indie director William Girdler, Grizzly and Day of the Animals. Plus Airplane!

In spite of that, my script takes great strides…er, waddles to stand on its own webbed feet. Like its oversized antagonist, GRIZZLED! is a mutant, not a clone. I hope to channel the spirit and some of the elements found within those and other, similar genre films of the era into its own unique beast.

GRIZZLED! is an action/adventure creature feature spoof that will aim for a PG-13 vibe, with some adult language and situations, and gore for comedy sake. It will be a SAG production, shooting will occur in August, and the film will be ready for a January release. The penguin will be handled as a practical puppet effect, keeping true to the tone of the era.

Roy George, Chief Forest Ranger – Roy’s parents and I decided to name him after (Jaws star) Roy Scheider and (Grizzly and Day of the Animals star) Christopher George, after realizing the lead singer of the Culture Club missed a golden opportunity. Roy struggles to take hold of his own life, but like most things, he just can’t seem to follow through with.

Dick “Dog” Dingo, Environmental Specialist – Another amalgam of the above-mentioned films’ stars—Richard Dreyfus and Richard Jaeckal, in this case. Dog is tough, smart, well-prepared, and would be the action hero of this flick…if people could just get past his mild Australian accent.

Forster, Independent Hunter – This brash, no-nonsense hunter didn’t submit a bio, so we’re not quite sure what to say other than we’ll be expecting a posthumous lawsuit from Robert Shaw for personal damages caused by excessive grave-rolling.

Chuck U. Farley, Park Supervisor – Every good tourist town that’s under siege by a killer critter needs a great jerk in charge of things, someone who will worry about the bottom financial line instead of the human cost. As his name implies, Chuck U. Farley is ready to deliver!

And Jataguin, the Mutant Penguin, appearing as itself.

WHY WE NEED HELP!

GRIZZLED! has been on the path to production for almost a decade. It was optioned to a small production company shortly after completion in 2009, though rights reverted back to me as the recession wore on. In 2014 I packaged it with two other films, for which we raised half of the financing by 2015. And that was it. Half. Toss in a couple of bad experiences with shady producers on other projects, and I began brainstorming new ways to bring this turkey–I mean, penguin to life.

Then I realized a lot you loved penguins, and that you value the value of life, and that I could tug on your heart strings with my cute li’l penguin, even though it’s big and kinda ugly and ferocious, but it’s still a penguin, so I figured you’d still be compelled to help us bring the poor thing to life. So we can kill it. Which is really helpful to all of us, since we’ll all feel good about ourselves for contributing to the circle of life in such a meaningful way. So what are you waiting for? Donate now!

On a final, more serious note, I’d like to do things a little different from the norm—something I couldn’t do if I financed this through traditional means. I’d like to look out for the cast and crew of GRIZZLED!, offering profit participation to most involved, in addition to film credit and (crappy) pay to everyone on set. (The exception for profit participation is interns/PAs or crew members who are only on set for a few days.)

Forgive me for stepping on a soapbox, here, but modern (big) business practices seem to be the impetus behind quite a few modern problems—at least, here in America. It’s often considered “good business” to topple other businesses within their communities, to abuse and underpay the employees who make their companies strong, to manipulate their audience and clients into false beliefs, and to deprive their communities and country of tax dollars. To me, that seems like a “good” deal for predators, and yet a disastrous way to orchestrate and maintain prosperous, healthy societies.

If I get my chance to drive this boat, I hope to reward you with an entertaining product, and to compensate those who put their blood, sweat and tears (of laughter) into bringing this gnarly penguin to life for you. So we can kill it.

And actually make society a little bit better in the process…

For complete details and to support the film, please visit: 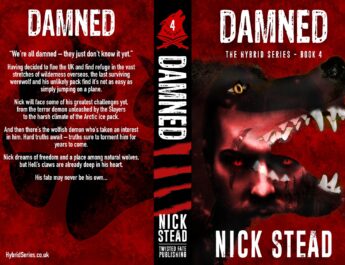