Synopsis:
Street-smart Laquita Johnson (Tamiko Robinson Steele, Nashville Repertory Theatre’s A Raisin in the Sun) has high hopes for a fresh start at a new school, but those hopes are halted when the dean (Brad Edwards, Still the King) forces her on a field trip with the cheese-loving, dim-witted students of Archepology 101 led by the daffy Professor Thompson (Jesse Perry, HG Chicken and the Chronological Order.)

On the bus, each 80’s student archetype is present and accounted for, but once the group makes it to the haunted woods of Black Holler, roll call becomes nearly impossible! The campers were warned that the woods were dangerous, but they were all too busy hooking up, drinking beer and eating cheese to get the message. With her classmates disappearing left and right, and with everyone seemingly oblivious to the dangers around them, Laquita has to confront her troubled past in order to fulfill her destiny, escape the horrors of Black Holler, and save…er umm… some of the students along the way.

It’s about to get campy, in this comedic homage to the horror movies and pop culture of the 1980’s!

Black Holler: It’s Gonna Be Grody to the MAX! TRAILER from BLACK HOLLER on Vimeo.

Black Holler is a 90-minute horror-comedy set in the late 1980’s- created and produced by a group of first-time FEATURE filmmakers from Nashville, TN. The cast is made up of some of Nashville’s finest comedians, musicians as well as actors and actresses from the stage and screen. It is also the directorial debut of Jason Berg.

Black Holler was funded by successful Kickstarter and Indiegogo campaigns in addition to a sponsorship from Nashville Fringe Festival.

BLACK HOLLER would probably be rated “R” by the Motion Picture Association
of America for “violence, language, drug use, disturbing images and some sexuality.” 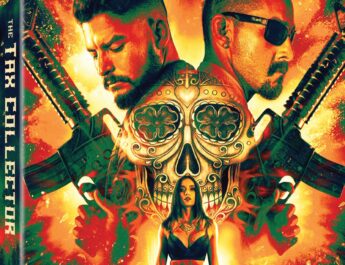 THE TAX COLLECTOR – On Blu-ray, DVD and UHD/Blu-ray SteelBook October