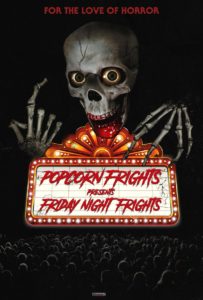 Popcorn Frights and Savor Cinema proudly present the 30th anniversary of A NIGHTMARE ON ELM STREET 4: THE DREAM MASTER!

This summer, we’re celebrating the scariest cinematic boogeyman ever created with a special presentation of one of his most fantastically frightening films! It’s the son of a hundred maniacs himself — Freddy Krueger in A NIGHTMARE ON ELM STREET 4: THE DREAM MASTER!

Not only will we feature a newly restored presentation of this 80s classic, but we will also be serving slices of Freddy’s soul-fully delicious meatball pizza (cheese pizza will be available as well) and host a Q&A with the film’s production designer, Mick Strawn (BLADE, BOOGIE NIGHTS, CANDYMAN).

Resurrected from the depths of hell, Freddy (Robert Englund) returns to kill the remaining teens on Elm Street. But even after he murders the last kid, Freddy still isn’t satisfied and looks for other ways to continue his sinister murdering spree. A NIGHTMARE ON ELM STREET 4: THE DREAM MASTER is a volcanic fun-bomb of pink and green neon and jaw-dropping special effects that must be seen on the BIG SCREEN!

More information and tickets can be found at: