Here are some of the horror DVD/Blu-Ray releases for Sept. 18th!

Medical student Hirosuke Hitomi slips out of the asylum in which he has been wrongfully confined and stealthily assumes the identity of a recently deceased nobleman with whom he bears an uncanny resemblance. Hirosuke eases his way into the nobleman s household and his dead double s marital bed. But as long-repressed memories begin to bubble to the surface, he soon finds himself drawn to a remote isle where he is confronted by a mad scientist and his malformed men, and discovers the key that will unlock some long-suppressed mysteries of his own.

After being tricked by the Tall Man (Angus Scrimm) once more, Reggie (Reggie Bannister) and an unconscious Mike (A. Michael Baldwin) are left alone by their attacker who is content with the head of their now deceased friend Liz (Paula Irvine) for now. Mike doesn t awake from his coma until two years later after his brother Jody (Bill Thornbury), whom had died in a car accident, appears to him in a dream. Mike, Reggie, and Jody, who is now just a flying, burnt sphere, team back up to fight the Tall Man again, but before they can, he appears and pulls Mike into another dimension. Now it s up to Reggie and Jody to find Mike before that infamous mortician is able to transform him, only this time, he has way more spheres. Thousands of them.

Based on the local legends and stories of people who ve visited the real-life abandoned hospital, GONJIAM: HAUNTED ASYLUM follows the crew of a horror web show who plan to stream live from inside the asylum. To attract more viewers, the show s host arranges some scares for the team, but as they move further into the nightmarish old building, they begin to encounter much more than expected.

Mike (A. Michael Baldwin) has once again escaped from the Tall Man (Angus Scrimm) who had begun to transform him. Leaving Reggie (Reggie Bannister) and his spherical brother, Jody (Bill Thornbury), as he travels through various dimensions and time in order to discover more about his nemesis and find out what really happened the night his brother died.

Brand New HD Master from a 4K Scan of the Original Camera Negative! From raw desire… to rampant destruction! Tim Matheson (Up the Creek), Meg Tilly (Psycho II), Bill Paxton (Aliens) and Hume Cronyn (Cocoon) come face to face with mankind’s deepest — and darkest — primal urges in this disturbing and suspenseful psychological thriller. Directed with flair by Graham Baker (Alien Nation) and packed with pulse-quickening twists that spring from its terrific premise, Impulse generates enough electricity to make your hair stand on end. When Jennifer (Tilly) and her boyfriend Stuart (Matheson) return to her idyllic hometown, they discover that all boundaries of civility seem to have eroded. Mystified by the actions of normally kind townspeople who are suddenly driven to extremes of irrational—and violent—behavior, Jennifer and Stuart attempt to get to the bottom of the increasingly life-threatening chaos… before it destroys them.

The body of a young woman is found on the beach, shot in the head, burned to hide her identity and dressed in distinctive yellow pyjamas. With the Sydney police stumped, former Inspector Timpson (Ray Milland, Dial M for Murder) comes out of retirement to crack the case. Treading where the real detectives can t, Timpson doggedly pieces together the sad story of Dutch immigrant Glenda Blythe (Dalila Di Lazzaro, Phenomena) and the unhappy chain of events which led to her grisly demise.

After William’s fiancé dies in a car accident, his life begins to spiral downwards into loneliness and seclusion. Taking a friend’s advice, he attends a gathering, unaware that a séance is being held upon his arrival to try and contact the deceased. When William returns home, it starts to dawn on him that things are not what they seem as something – or someone – begins to haunt him. A frightening tale of one man’s decent into madness, the supernatural, and the doors to the other side. Director: Nathan Hill; Cast: Daniel Rankin, Piers Cunningham, Bronwyn Murphy; Producer: Warren Croyle. 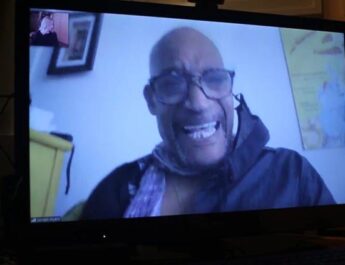