AMORTAL is a sci-fi web-series documenting two test subjects converting to synthetic bodies in hopes of becoming the world’s first true immortals. Told through a combination of vlogs and documentary filmmaking this experimental series will take a grounded approach to science fiction and form the foundation for a new science fiction universe. David Walpole (Sew the Winter to My Skin, Image Killer) & Jessica Barrera (Jump, Dreamcatcher) star as the two lead roles.

“It’s a very personal story compared to what we’re used to seeing in modern science fiction,” says Davison. “More often than not we see projects put external obstacles on the heroes, but for us, we wanted to see how a person might handle both losing the weight of mortality, only to replace it with the weight of eternity.” Nik Benn will be taking on a new role with this project as he helms as the main series director. “This project is a little like the aligning of the planets. The cast and crew we’ve got attached are some super talented folks,” says Benn about writing the show.

AMORTAL is currently running an interactive Indiegogo campaign which allows the viewers to get involved with the show with such peaks as becoming employees of the synthetic tech company, Coil Industries and other exciting perks that will make any fan want to live forever.

This is the second time that the Spiderclown founders are working with Christopher Giroux, as an executive producer. “The style of filmmaking and storytelling used by this incredible team is ground-breaking, I am once again honoured to be joining the Spiderclown family on this production.”

Amortal will continue with the style established by Image Killer with transmedia elements that will take the audience deeper into the world. Backers on the indiegogo will receive ID badges with QR codes that take them to secret places on the series website. “Because it is a digital series Amortal is a story that can be told not only through our video content episodes but through a larger interactive world for our fans to dive into,” says Young who plans to tackle new ways to engage the audience. Currently the show is in pre-production with production slated to begin in December of 2018.

AMORTAL will bring 14 unique episodes which will launch in early 2019. You can watch the teaser on YouTube: https://www.youtube.com/watch?v=ug3MeFP3KGA, learn more about the project on their website: www.coil-industries.com. The only question left is … do you want to live forever?

About Christopher Giroux:
Christopher Giroux is a Toronto based filmmaker. Giroux is best known for his work such features as on I’ll Take Your Dead, Bite, Bed of the Dead and Antisocial. Giroux has over a decade of experience producing projects which have been screened and distributed world-wide. Currently Giroux’s newest project The Heretics is screening on HBO Canada.

About Spiderclown:
James Young, Nik Benn and Michael Davison are the filmmakers behind Spiderclown, a team of producers who specialize in narrative filmmaking for TV & film. Based in Toronto, each have almost a decade of experience in their respective roles as producers, directors and writers. In 2017 they created, wrote and produced the CMF funded television series Bedtime Stories for Men and in 2018 they created the experimental webseries-podcast Image Killer. 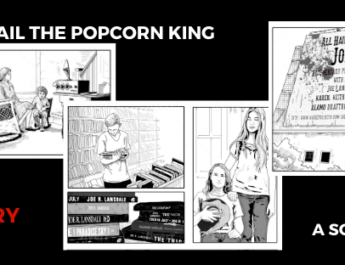