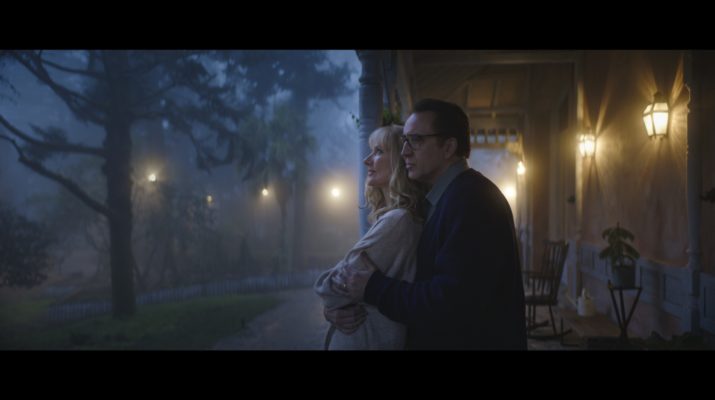 following the huge success of “MANDY”

Directed by the legendary Richard Stanley

RLJE Films has acquired US rights to the highly-anticipated horror/sci-fi COLOR OUT OF SPACE in a low-mid seven figure deal ahead of its World Premiere at Midnight Madness at this year’s Toronto International Film Festival. The film is scheduled to screen on Saturday, Sept. 7, 2019 at 11:59 p.m. at Ryerson Theater.

COLOR OUT OF SPACE stars Nicolas Cage (Mandy, Leaving Las Vegas), Joely Richardson (“The Rook”, “Nip/Tuck”), Madeleine Arthur (“Snowpiercer”), Brendan Meyer (“The OA”), Julian Hilliard (The Haunting of Hill House), Elliot Knight (“How to Get Away with Murder”), with Q’orianka Kilcher (The New World) and Tommy Chong (Cheech & Chong). The film is directed by Richard Stanley (Hardware, Dust Devil) who will make his return to the Midnight Madness lineup after 29 years. He co-wrote the screenplay with Scarlett Amaris (The Theatre Bizarre).

“We’re beyond excited to be reteaming with SpectreVision and XYZ Films for COLOR OUT OF SPACE,” said Mark Ward, Chief Acquisitions Officer for RLJE Films. “Nicolas Cage unleashes another memorable performance – an incredible follow up off the heels of MANDY.”

COLOR OUT OF SPACE is based on the short story by H.P. Lovecraft. After a meteorite lands in the front yard of their farmstead, Nathan Gardner (Nicolas Cage) and his family find themselves battling a mutant extraterrestrial organism as it infects their minds and bodies, transforming their quiet rural life into a technicolor nightmare.

The deal was negotiated by Mark Ward and Jess DeLeo from RLJE Films and Nate Bolotin from XYZ Films on behalf of the filmmakers.

SpectreVision was founded in 2010 as a home for creator-driven projects that test the boundaries of the genre space. Films such as A Girl Walks Home Alone at Night, Cooties, The Greasy Strangler, Mandy, and the upcoming Daniel Isn’t Real have earned them spots at the most prestigious festivals in the world, as well as numerous awards and nominations. They recently signed a two-year, exclusive first look deal to produce television for Legendary Entertainment. In the interactive space, SpectreVision partnered with Ubisoft for the VR game Transference, which garnered 14 awards and nominations, including DICE, Raindance and IGN. In 2017, Under their newfound Company X banner, they premiered the film Bitch at Sundance, followed the next year with Seven Stages to Achieve Eternal Bliss at the Tribeca Film Festival. They recently launched their marketing and events arm, Company X Marketing.

Based in Los Angeles and Kuala Lumpur, ACE Pictures Entertainment is a film production and investment company, with a focus on genre film projects in partnership with diverse US production companies and producers.

Since its launch in 2017, ACE Pictures Entertainment provided full financing for drama CLEMENCY, winner of the 2019 Sundance Grand Jury Prize, starring Oscar-nominated / Golden Globe-winner Alfre Woodard, and acquired in the US by NEON and internationally by Focus Features; revenge thriller LEAVE NOT ONE ALIVE, starring Oscar-winner Melissa Leo and Bella Thorne; IMAGINARY ORDER, a dramedy, starring Wendi McLendon-Covey and directed by Spirit Award winner Debra Eisenstadt; M FOR MAGIC, a documentary about the world-renowned Magic Castle in Hollywood; CURRENT SEA, a documentary about illegal fishing in Cambodia; and produced alongside Elijah Wood’s Company X / SpectreVision, the supernatural thriller DANIEL ISN’T REAL, starring Patrick Schwarzenegger and Miles Robbins, acquired in the US by Samuel Goldwyn Films and internationally by Voltage; and horror COLOR OUT OF SPACE, starring Nicolas Cage and directed by Richard Stanley. ACE Pictures also provided partial financing for COME AWAY, a fantasy film, starring Oscar-winner Angelina Jolie and directed by Oscar-winner Brenda Chapman.