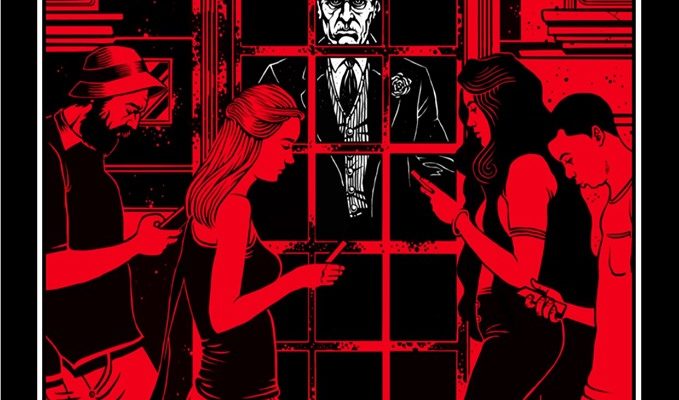 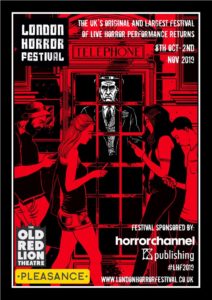 The UK’s largest festival of live horror performance returns for its 9th year, expanding over 2 venues and 3 theatre spaces, with help from their sponsors Horror Channel and PS Publishing. This year’s festival has slithered its way through Islington to join forces with Pleasance Theatre, presenting over 30 shows to rattle your bones and send shivers down your spine. Once again, the suitably spooky Old Red Lion Theatre will play host with 2 brand-new full-length productions seeing us through Halloween.

The Festival is honoured to have playwright David Pinner, the author of RITUAL (the novel that inspired the classic cult movie THE WICKER MAN) present the world premiere of his play Edred, The Vampyre at the Old Red Lion from the 28th October – 2nd November; casting a gothic shadow over the theatre with his soon-to-be modern horror classic. Between the 8th – 26th October the Old Red Lion will be re-united with former (deceased) residents via The Knock Knock Club’s docu-play Last Orders. A blending of fact and fear, the Knock Knock Club have created a show based on the haunted folklore of the 600 year old pub and the paranormal investigations they have conducted throughout the building over the past few months. Both productions are bound to terrify, entertain and keep you checking under the bed before you go to sleep at night!

Alongside these productions, the Horror Festival will have an eclectic programme of shows by new and established horror companies taking over Pleasance Theatre’s Main House and Stage Space between 8th – 25th October. Festival Patron Nicholas Vince, Chatterer in Clive Barker’s Hellraiser and Kinski in Nightbreed, brings his first one-man show to the stage in I AM MONSTERS!, an autobiographical exploration of monsters and what it means to be an actor in the genre. The Milkman Cometh by DeadPlant Theatre aims to sour your semi-skimmed hopes and dreams with its grotesque horror comedy tale of demonic milk-deliverers, accompanied by a live metal band. More horror comedy appears in the form of multi-award winning Casual Violence’s 10th Anniversary extravaganza (and final ever show) Hang The Suits as they bring us the best of their deranged sketches in this double-bill event.

Horror Cabaret is also in full swing this year with Nevermore Theatre’s Serial Killer Cabaret, The Bitten Peach’s Not Another Asian Horror and PopHorror’s drag slasher panto He’s Behind You! bringing some showbiz glam to the genre!

The Festival are also aiming to increase representation and support for LGBTQIA+ writers within the genre through their annual playwriting competition focusing entirely on Queer Horror Writers; with the winner being unveiled to the public on the 25th October.

Don’t miss your chance to join the festivities and celebrate the blood-curdling joy of live horror with fellow theatre-goers this Halloween season!

THEY SAY THIS PLACE IS HAUNTED.
So we stayed overnight, turned on our cameras, pointed our microphones into the dark and asked ‘who’s there?’
In ‘Last Orders’ we present our findings – the uncanny, the unnatural and the unexplainable – as more than 600 years of history clamours to be heard.

In this autobiographical show Nicholas Vince, Chatterer in Clive Barker’s Hellraiser and Kinski in Nightbreed, shares stories from his first encounters with monsters – by torchlight under bedclothes – to the making of the films. He reads excerpts from his favourite horror classics and reveals what it takes to be a monster.

This wild and darkly comic journey takes you down the streets and back alleys of modern Dublin, from award-winning writer, Stewart Roche and ground-breaking young Irish theatre collective, The Corps Ensemble. This thrilling new play brings you to places you shouldn’t go but want to – while asking one question: how well do you really know yourself? Inspired by the world of Edgar Allen Poe.

Lovers of scary stories, unite. Adding the fear factor to increasingly popular spoken word nights, storytellers from across the Horrorfest and beyond will share their worst (or should that be best?) nightmares at Blackshaw’s fifth annual Scare Slam.
Prepare yourself for a night of chilling tales from both sides of the line of veracity.

“I want you to close your eyes and relax…”
An ancient evil is stirring in the Ecuadorian jungle. Will Garrett pay more than time and money for his eco-tourism? There’s blood-thirsty demons, venomous serpents and human sacrifices aplenty in G. M. C. Lewis’ riotous, trip to the tropics!

Multi award winning sketch villains Casual Violence have been making sad and sinister comedy for a decade. Tonight is their final show: a celebratory double bill (with an interval, they’re not monsters) of their finest and most fearsome characters. ★★★★★ – The Skinny / Broadway Baby / ThreeWeeks / Reviews Hub / Brighton Argus / Latest 7

This show explores Italian historical facts and legends that inspired gothic classics such as Dracula, the Mummy, Frankenstein and the Woman in Black. The show is divided into vignettes, linked by a sarcastic, devilish host, the Prince of Darkness, who will lead the audience into a journey through ancient horrors.

A convict and a free man. An orbitoclast. A locked room.
What could possibly go wrong?
And also, what is an orbitoclast?
Two old friends connect and collide /
Righting the wrongs of the class-divide.
But is psychosurgery the answer? Or do they just need to hug it out?

‘Do you seek purpose? Do you want to be one of the chosen few? Come, Friend, and join us for a once in a lifetime opportunity.’

From ONEOHONE Theatre Co, CULT is an interactive exploration of a phenomenon. Something is stirring. From beneath, it rises.

J is building a city.
Held in a backyard for 17 years, J seems to finally be trying to make sense of the ordeal.
Or maybe that’s just what she’s telling us.
It’s hard to tell, she just keeps building…
Either way, something’s screaming from inside.

‘Be bold, be bold, but not too bold, lest that your heart’s blood should run cold.’
By the company that brought you ‘Peaceful’ and ‘A Curse of Saints’, ‘Mr Fox’ is a brand new take on the gleefully horrific folk tale about a plucky young woman and her mysterious fiancé.

Notorious for their crimes, what if the likes of Charles Manson turned their ‘talents’ towards showbiz?
Nevermore Theatre takes a stab at separating fame from infamy – all through song and dance of course!
Sold out at Edinburgh Horror Festival (2018/2017), SKC is a must see for fans of true crime!

In a world where clowns were born to scare, one (accidentally) discovers what it means to make someone laugh. Previously vessels for comedy, tragedy and social commentary; horror has turned red noses into jump scares and Hallowe’en costumes.
Clown is here to take them back.

Creatures lurk in the darkness outside time. And you work for them. It’s your job to cover up their existence, kill those who get too close, collect their dying screams and make the coffee.
But you’ve got ideas… The great conspiracy is under new management.

We all have some evil in us: there is a Mr Hyde to our Dr Jekyll, a yin to our yang, a fig roll to our jaffa cake. Embrace your dark side and come to our evil lair for an hour of horror comedy you will never forget.

Humanity’s extinction leaves behind an AI being programmed to recreate the human race when the time is right, with the complete works of Shakespeare as a guide to the human spirit. Humanity must thrive… but at what cost?
Winner – Fringe Review Outstanding Theatre Award (Brighton Fringe 2019)

‘He’s Behind You!’ combines the familiar fun of traditional Pantomime with the camp thrills of an ‘80s Slasher, starring a wealth of Drag talent. Expect a high body count, and a higher double entendre count, as Fairytale meets Scarytale. The most bloody fun this Halloween Season… oh yes it is!

A modern re-telling of ‘Dracula’, where the Gothic Classic has been flung into a real time intimate ‘drawing room’ setting. In this psychological thriller, Bram Stoker’s novel is retold as a contemporary haunting tale of existential angst, nihilistic ambition, and toxic romance in the metropolis of London…. where everyone is lonely.

Three hauntings, from the past, future, and present.
Three ghosts in the machine.
Three uncanny stories, from the creators of UNBURIED, APRIL, and BADD.
An evening to remember.
Performed by Carrie Thompson
Written and directed by Chris Lincé
Praise for UNBURIED: “Utterly, compulsively gripping. I don’t think I’ve seen a more intelligently crafted show this year.” ☆☆☆☆☆ The Stage.

Five women. One cold case. A house of dolls.
Three sisters travel home for the funeral of their father, the world’s greatest dollmaker. With an unsolved case hanging over the family, they must work together to unearth dark secrets.

An all-female, dark-comedy thriller that will delight fans of true crime.

Come down to Tittitutar town where things are not quite right. Something you can’t quite put your finger on, but one journalist is determined to get to the bottom of it. Hearing about a lady with a little man inside her, he seeks her out and encounters the town’s other peculiar oddbodds.

“Comedy geniuses” (Jeremy Vine) Megan from HR. present Children of the QuornTM, a new sketch show, complete with seance.
A “super-slick double-act sketch comedy with razor-sharp timing” (ThreeWeeks), this an original, “wickedly smart” (TheatreWeekly) hour of comedy that will raise the roof and the dead.

Chamber Piece Theatre returns with a trilogy of chilling tales, certain to upset your sleeps. Stare into the face of fear, the psyche of a madman, the heart of the beast! A warning to the curious – this show has been designed to penetrate your mind.

It’s mother’s birthday, and sisters Jocasta and Jupiter are making their annual visit. The soufflé is on the rise, the rosé is on ice, and they have murder on their minds. But will the sisters get to give their darling mother the ultimate present, or does she have other plans…?

Above breathing, above screaming for help, laughter always wins control over the larynx, so prepare to risk everything as acclaimed comedy double-act The Electric Head present a divinely-comic retelling of Dante’s Inferno, in this terrifying live radio recording, and discover that, after 700 years, Hell has had to modernise.

Underground cult hit horror comedy podcast The Unseen Hour makes its highly anticipated return for a Halloween special. A surreal radio drama live on stage with three actors playing ten roles and creating live foley sound effects, plus guest performances and live music in a brand new tale of the uncanny, the macabre and the absurd.

In fringe theatre, no one can hear you scream: one hour, one woman, one cult movie.
The sell out Edinburgh Fringe show returns celebrating 40 years of the horror classic.
Katy Schutte tackles the entire movie alone (with a cat).

Come join us as we celebrate the brightest new horror talent with this year’s Playwriting Competition winner as performed in a rehearsed reading by Danse Macabre Productions; it’s bound to terrify and delight!

Enter the world of queer Asian cabaret and experience the pleasures of The Bitten Peach, the Pan-Asian performance collective featuring a stellar lineup of the UK’s legendary queens, kings and creatures of the Far East. Devour the forbidden fruit and join us for this SLAYsian dynasty’s comedy cabaret slashup!

World Premiere from the author of RITUAL, the novel that inspired THE WICKER MAN
Edred is a thousand-year-old bisexual vampire, who slept with Shakespeare but never bit him. Breaking all of Stoker’s laws, Edred loves garlic and crucifixes, and resides in a church where he is one day confronted by two vampire-hunting gap year students.

Truth or Dare Experience In Hollywood This Weekend