On Halloween, six friends encounter an extreme haunted house that promises to feed on their darkest fears. The night turns deadly as they discover that some monsters are real.

Directed and written by: Scott Beck and Bryan Woods

The joy of a creative partnership like ours is that we can write two films at once. In 2016, those scripts were each a love letter to the horror genre: A Quiet Place and Haunt. If A Quiet Place was our ode to “prestige” horror and an attempt to elevate tired genre conventions, then Haunt was our counterpoint – a feeling that horror doesn’t need to be “elevated” to be wonderful. It was a return to the classic slasher staples, perfected by our heroes like John Carpenter and Tobe Hooper; films that strap you into a terrifying roller coaster and plague your nightmares long after the credits roll.

Our approach to Haunt was informed by two infatuations; our love of simple, streamlined B- movies and our shared experience of growing up together in Iowa, frequenting the local haunts as teenagers. Our hometown haunts were not commercially-funded glossy institutions like Universal Horror Nights, but more like abandoned factories of fear. They would scare the community with paired down aesthetics, stripped back to the core of rust, brick, and darkness, using minimalism to feed your imagination. Those early experiences informed our global approach to filmmaking, teaching us the importance of “what you don’t see is scarier”. It’s a lesson that stitched itself into the fabric of both A Quiet Place and Haunt, two scripts that were written without a guarantee they would ever have a life on screen. But much to our surprise and good fortune, both films were greenlit simultaneously.

One of our key Haunt collaborators was Eli Roth. We grew up as fans of Eli’s filmography and treated his DVD commentaries as a film school of sorts. When we got word that Eli loved the script and wanted to come on board as a producer, we were excited but also aware of that adage: “Never meet your heroes”. Much to our relief, Eli was not only a fantastic human and cinephile – he lent tremendous advice throughout the entire process, starting with the script. For a filmmaker who is known for dismemberment and gore, we were surprised to find Eli’s focus always came back to the characters first. We loved this instinct, as it echoed our own: create characters that the audience loves, so when the body count rises, the emotional stakes run higher. 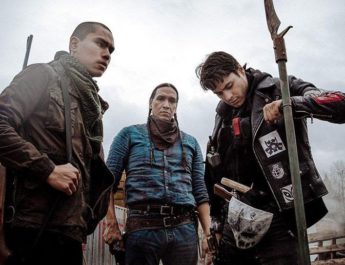