It’s Halfway to Halloween, and Fright-Rags is saluting the midpoint to our favorite holiday by bringing back one its most-requested items, plus new apparel from John Carpenter’s Halloween, Shocker, and The Last Drive-In with Joe Bob Briggs.

Fright-Rags has resurrected its Haddonfield varsity-style fleece hoodie, which sold out in minutes upon its release in 2018. It’s available for pre-order for five days only, along with a new, matching Halloween wool snapback cap to complete the look.

This is not a test – Fright-Rags has released Shocker clothing. Wes Craven’s 1989 slasher has received four shirts, including one that glows in the dark, in addition to a pair of Horace Pinker socks. 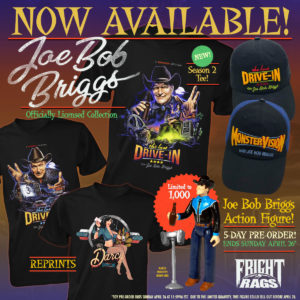 In honor Joe Bob Briggs’ triumphant return to The Last Drive-In, Fright-Rags has made the official Season 2 artwork available on T-shirts and hoodies. The Last Drive-In and MonsterVision hats will soon be restocked as well.