From PARKHOUSE PICTURES, producers of
ANNA AND THE APOCALYPSE & THE KINDRED

Why choose friends when you could have…

Jonty, a failing influencer with an ambition to reach over a million followers, will stop at nothing to become famous. A new start at University brings with it hopes of a resurgence in his popularity when a demonic presence appears in his student house. Jonty decides to stream his and his housemates experiences with this supernatural entity to gain the fame and fortune he’s most been craving. But at what cost?

With a World Premiere at Frightfest 2021 and theatrical screenings at Vue and Showcase cinemas earlier this year, FOLLOWERS will debut on Blu-ray & digital platforms this 18th July 2022 courtesy of Screenbound Pictures, with the physical release packed full of fun extras.

An exciting British independent production from Parkhouse Pictures, producers of the BAFTA Scotland nominated Anna and the Apocalypse, this darkly comic satire on today’s influencer generation marks a ‘chilling debut’ (Film Stories) from late director Marcus Harben, who very sadly passed away before the film was released. Combining horror with humour in the tradition of Get Out and Black Mirror, Followers puts a fresh new spin on found-footage movies as what starts as an hilariously bad YouTube video series develops into a warning to the world about a shocking new strain of supernatural serial killer. 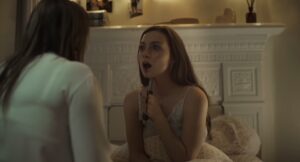 Followers will be available on Blu-ray & to rent and buy on digital platforms from 18th July.

BLU-RAY SPECIAL FEATURES include:
Behind the scenes with the director – Go behind the camera with director Marcus Harben as he discusses the day’s shoots, in the moment directing with cast and crew and some funny outtakes.

Interview with Cast members (Starburst Magazine) – Castmates Harry, Loreece, Dan and Erin Zoomed in with Martin Unsworth, associate editor of Starburst magazine to talk about their experiences filming, what drew them to the project, sleeping on set, the impacts of influencer culture and pay moving tributes to their fun and fearless director.

Producers Podcast with Behind The Scenes Gallery – Giles Alderson welcomed producers Tracy Jarvis & Steve Jarvis to the podcast this week. They chatted about leaving their jobs to pursue a career in film, how they’ve made their films, and found the money to do it, and much more.

Harry’s House – Throw four young people in a house for two weeks and let chaos ensue. This informal on set Q&A session with Harry Jarvis lays all the pranks and stories bare. Get under the skin and learn more about the complex character that is Jonty.

Messing Around the House – Lets scare Harry! See how the cast and crew try to play a prank on Harry Jarvis, but who’s pranking who?