Night of the Living Dead

Dawn of the Dead

Day of the Dead

That’s right, “The DONALD” is now “The ZOMBIE!”

DONALD OF THE DEAD is a comic book featuring at least 32 blood red and undead orange enhanced black & white pages from the creators of HERO HAPPY HOUR — Dan Taylor and Chris Fason.

All Hell breaks loose at the 2016 GOP Convention as nominee of the Republican Party for President of the United States Donald Trump unleashes a necromantic nightmare of unspeakable horrors. Four unfortunate liberal-minded individuals trapped within the Quicken Loans Arena in downtown Cleveland must ban together in order to survive Donald of the Dead and his zombie hoard.

Dan Taylor has published several comic books over the last 15 years. Here’s how he came up with the idea for DONALD OF THE DEAD…

“I found myself waking up in the middle of the night terrified about a possible future should Donald Trump become President of the United States,” says Taylor. “I figured what better way to exercise this particular demon than by collaborating with my long time independent comic publishing partner Chris Fason on a terrifyingly fun zombie story?”

“I’m always fascinated by our political system and how some people make it into power. At the outset of this year’s Primary season, I was 1000% sure Donald Trump would be laughed off the stage and left in the dust, seen for the narcissistic egomaniac he is. Boy, was I wrong. He may not be the President we need, but our zombified Lich King Trump is definitely the President we deserve. Dan Taylor and I couldn’t help ourselves but to show this gruesome madness for what it is.” 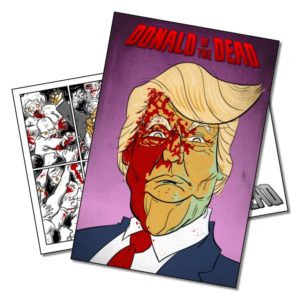 Check out a few preview pages…

Are you a Trump supporter?

Are you a Trump hater?

Either way, this is definitely going to be a campaign you can back!

Cast your vote by clicking the pic & backing this campaign today…

-A print copy of the DONALD OF THE DEAD comic book

And what zombie fan doesn’t want their own…

Please visit DONALD OF THE DEAD on Kickstarter for more information including:

-A special look the first 8 pages of the comic book

-And a detailed look at all of the many available rewards

You can also support the campaign by following on Twitter!