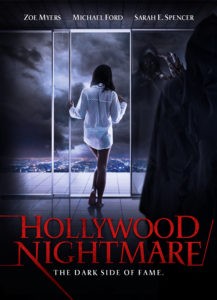 2016 | English | Horror | 100 minutes | 1080p
Up and coming movie star Kendall Summers finds out the hard way that that everything has a price – and that the road to Hollywood can be a nightmare.

Highlights:
•Director Chase Smith, Seasoned Genre Veteran, wrote and directed Hollywood Nightmare. He is also responsible for our upcoming title Creature Feature. As well as instant classics Buried Cain and Realm of souls that were also put out by Brain Damage Films.
•Star Zoe Myers has had roles in such high profile films as Anchorman 2, ATL, and genre success Dance of the Dead.
•Initially backed by an Indiegogo campaign, the film had a great reception and exposure, from the genre’s insatiable fan base.

Since 2001 Brain Damage Films has been one of the largest and most respected independent horror film distributors worldwide. Our catalog of hundreds of horror and shock movies ranges from reality/shock classics like Traces of Death to newer, high quality independent features.
Brain Damage Films has fans around the world who know and appreciate our films. We’ve got a name for them: Gorehounds. Do you have a lust for graphic, bloody depictions of death or violence? How about the “three B’s” (Beasts, Blood, and Boobs)? Maybe you’re a connoisseur of shot-on-video, low-budget horror… Or an earnest filmmaker working your way up to direct the next Saw or Friday the 13th?
If any of these descriptions sound familiar, you might be a Gorehound!