“Impending doom will be a hoot.” – Nerdist
“The apocalypse just got 100% funnier.” – The Mary Sue

Los Angeles, CA – Diani & Devine Productions is honored to announce the world premiere of their latest feature, Diani & Devine Meet the Apocalypse, at the Austin Film Festival this October. The premier film festival recognizing writers’ and filmmakers’ contributions to film, television, and new media, AFF recently unveiled the first slate of films included in the 2016 lineup. Written by and starring Gabriel Diani and Etta Devine (The Selling, “Huck Finn [Robotic Edition]”), Diani & Devine Meet the Apocalypse is a catastrophic comedy about two struggling comedians who discover that surviving the end of the world is almost as difficult as surviving Hollywood. 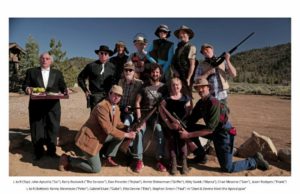 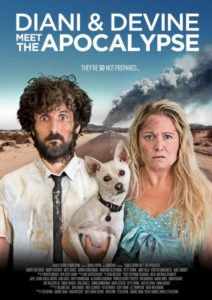 Two comedians. One apocalypse. When all power and communication systems mysteriously shut off, down on their luck comedians Gabriel Diani and Etta Devine pack up their things and hit the road in search of a safe haven to wait out the possible extinction event. Accompanied by their trusty dog Watson and their miserable cat Mrs. Peel, the duo must struggle against the mundane realities of the collapse of civilization while retaining their decency and rationality as the rest of humanity starts getting really, really weird.

“We are thrilled to be making our world premiere at the Austin Film Festival,” stated producer/actor Etta Devine. “We are excited to attend the festival and experience all that it has to offer, including Migas tacos, we can’t forget the tacos.”

Gabriel Diani and Etta Devine are award-winning filmmakers, actors, and writers. Their first film, The Selling, premiered at the San Francisco International Film Festival, played at over 30 film festivals, was in the Top 10 of About.com’s Best Horror Movies of 2012, and received rave reviews from The Huffington Post, Ain’t It Cool News, and Filmthreat.  Written by Diani, the duo produced and starred in the feature.  In addition to Diani & Devine Meet the Apocalypse, the comedy pair have recently recorded voices for the popular cartoon “Bee and Puppycat.”