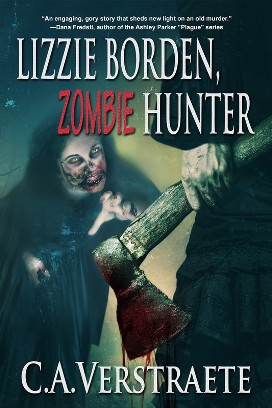 Wisconsin author C.A. (Christine) Verstraete claims to have solved the 1892 mystery of who killed Fall River, Mass. businessman Andrew Borden and his wife Abby Durfee Borden, saying the clues are in the photos.

“After looking at the autopsy photos online from the Lizzie Borden murder trial, I realized there’s one solution that has not been offered up until now, especially given the gruesome nature of the crimes,” says Verstraete, author of the book, Lizzie Borden, Zombie Hunter. “It’s clear from the photos and the murder method that the Bordens had turned into zombies.”

Verstraete admits that her theory may anger some Borden supporters and purists, but it also offers a plausible explanation and a new twist to the story in the fictional realm. “I was surprised that no one else had considered this approach,” she says. “The photos and violence behind the crimes suggest a completely different reason as to why the skulls had been crushed.”

In Lizzie Borden, Zombie Hunter, a fictional Lizzie Borden barely escapes being attacked by her father and stepmother, and as in real life, soon finds herself on trial for their murders. But what if they had already been dead? Even as Lizzie fights for her future, she joins other secret society members in protecting her sister, Emma, and others from this deadly scourge. But she and Emma soon find that all is not as it seems in Fall River, as even her father had his own deadly secrets.

The book is now on pre-order for Amazon Kindle and will be published in print and eBook on Sept. 13.

Verstraete is an award-winning journalist who writes for newspapers and magazines. She also writes short fiction and is author of the YA novel, GIRL Z: My Life as a Teenage Zombie.

Learn more at her website http://cverstraete.com or blog, http://girlzombieauthors.blogspot.com. The author is also available for interviews.