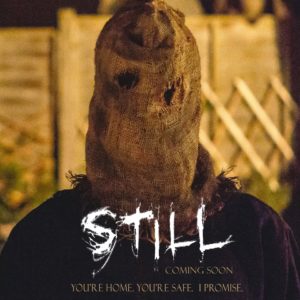 He’s the new face of horror and he’s bringing the scares right to your doorstep. Oliver Park, the award-winning filmmaker/writer of short film VICIOUS is bringing you another sleepless night with his next short film, STILL.

Oliver’s style is to creep rather than horrify, to make the audience use their own imagination as to what is ‘behind the door’. “Books are always so much intense as they rely on the audience injecting their own fear into the story, this makes the scare that much deeper and long lasting,” he says. “If a film can call upon the same techniques then it can terrify audiences that much more.”

Oliver’s first short, VICIOUS, has won eight awards internationally, including Gold Award for Best International Film at Toronto After Dark and Platinum Award at the LA Horror Competition. It was nominated for a further seven awards, including Melis d’Argent at Molins in Spain.

Oliver hails from Bath, England and now lives in London. He has been writing horror from a young age, having been inspired by directors like Alfred Hitchcock, John Carpenter and classic horror films from the 70’s and 80’s. He also loves to read ‘real’ ghost stories and urban legends.

The first teaser trailer for STILL has been released, with the film set for the film festival circuit in 2016 prior to public release.

The award-winning VICIOUS is now free to view worldwide on YouTube and Vimeo.