“You couldn’t never imagine the twists this book have!”

“This book blew me away! It’s so wonderful to have a fresh take on a classic genre. I adore ghost stories, love a good mystery and have a never ending affection for big creepy houses and anything paranormal. This book included all of these things (sort of), but did it in such a vibrant new way, I was hooked!!! I think I have a new favorite author to add to my list.”

“I could not put it down It is very well written many surprises around every corner love the characters you never now what was going to happen next creepy and a mystery and even shocking sometimes and there’s ghosts and did I say creepy.”

“This book blew me away—exceeded all expectations!! The unpredictable twists and turns made this a real page-turner… I couldn’t put it down!!”

“A well written and intriguing book! Kept my interest from beginning to end. A wonderful mystery filled with suspense!” 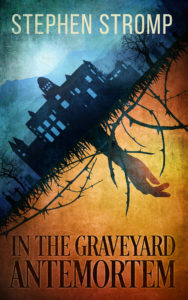 “An engaging, creepy mystery that’s packed with emotion and heart. A fun novel with just the right amount of darkness. Anyone still in touch with their inner teenager will enjoy trying to unravel this mystery along with the protagonist, whose adolescence is so brilliantly captured.” – SCREAM Magazine

“An astonishing achievement. A masterfully conceived mystery. A wonderful book of relentless pacing and intrigue. There are moments of the purest horror that made me wince with their brutality and unflinching awfulness – but it’s the drive of the mystery that powers this book along. I barely looked up until I’d devoured every word.” –TheSlaughteredBird.com

“Full of mystery throughout. A supernatural adventure tale, heavy on atmosphere and intrigue, with a strong teen female protagonist.” – TheBooksofBlood.com

Tons of fantastic reviews are raining down on ‘In The Graveyard Antemortem’ and it’s just the beginning! So what’s this mysterious story about…

Seventeen-year-old Lisa Jacobs is determined to solve her father’s gruesome murder. But before she can investigate in her own small town, she is forced to spend the summer with her Uncle Clayton, the owner of Grand Hallow—a massive funeral and mortuary operation the size of a small city.

Her move to Grand Hallow only deepens the mystery as she begins to suspect the strange and chilling occurrences there are linked to her father’s death.

With the help of her acid-tongued best friend and deadbeat brother, Lisa must unravel the secrets of Grand Hallow—before it’s too late.

In the Graveyard Antemortem is a mystery/suspense novel with a healthy dash of horror.

How did author Stephen Stromp come up with this story…

“I had the idea for In the Graveyard Antemortem back when I was 17. Back then, I wrote myself into a corner. I never quite knew how to pull it off. But over 20 years later, I dusted off my old notebooks and took another stab. Although much of my original, hand-written manuscript wasn’t usable (hey, I’ve learned some new words since then!), it became the framework of the final story in the book; and many of the ideas and characters remain intact. In fact, Lisa, Ned, Tina, Richard and Clayton, the gas station and Grand Hallow were all there waiting, hoping they wouldn’t be forgotten.

I knew I wanted the novel to keep the fun and scary tone of my original draft–with lots of suspense and moments of horror. But one thing I never set out to write was a mystery. Yet as I was writing, I realized I had to embrace the mystery element to do the story justice. I’m beyond excited to finally be sharing the story with you that I could never shake out of my head after all these years. I finished it as a gift to my 17-year-old self as well as a gift to lovers of mystery, suspense and horror. Thanks for reading!”

You’ve been showered with fabulous reviews, found out what the story is about, and how it came to be! Now it’s time to get your copy at: 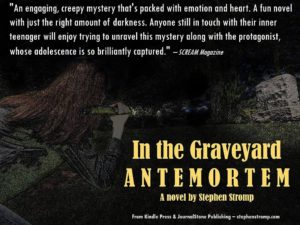 -Find out about his other novels