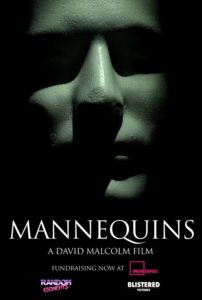 Random Elements, in association with Blistered Pictures, are proud to announce their first short film, “MANNEQUINS”. The project is now crowdfunding on Indiegogo and will shoot in late October 2016.

“MANNEQUINS” is the brain-child of Glasgow-based writer/director/editor/composer, David Malcolm, who has worked on several short films (Remnant, Mindless, The Night Whispered, Retribution) over the past two years.

The project will be co-produced by multi award-winning writer/director, Andy Stewart, under his Blistered Pictures banner. We are also delighted to announce that cinematography will be handled by BAFTA-winning Director of Photography, Alan C. McLaughlin (INK, Remnant).

SYNOPSIS
“Four teenage friends are on their way to the woods for fun, for cheap laughs…and scares. Where they are going, where they have been, isn’t anything they’ve ever seen. You can’t run, you can’t hide, you can’t SCREAM…”

Writer/Director David Malcolm had the following to say on the project:

“MANNEQUINS” is an idea which has been percolating in my head for a couple of years and where as I normally spill my guts about every idea I have to anyone that will listen, this one was handled a little more preciously.

I have pitched short film ideas before but none ever got the reaction that this one did and I knew I had to make Mannequins my debut short. I hope it’s really going to creep you all out!”

ABOUT THE DIRECTOR
A lifelong horror fan, David Malcolm has finally decided to let this nightmare bleed out of his head and into the world. Since editing Katie Bonham’s Mindless, which enjoyed its World Premiere at Glasgow Frightfest 2016, David has gone on to edit Nicholas Vince’s forthcoming short film, The Night Whispered, worked alongside Andy Stewart on his projects Remnant and She Lay at His Feet and also composed the driving Carpenter-esque soundtrack for Paddy Murphy’s short Retribution.

It is through the experience gained while collaborating with these film-makers, on set and in post-production, that has prompted David towards taking the next steps to his ultimate aim, to make his own films.

ABOUT THE PRODUCER
Former journalist-turned-filmmaker Andy Stewart burst onto the horror film scene in 2012 with his gruesome body-horror short film, Dysmorphia. Made on a budget of £160, Dysmorphia played many festivals around the world, winning several awards and causing fainting and vomiting spells. The film was also referred to as “Quite possibly the greatest short film ever made” by Canadian twin horror directors, Jen & Sylvia Soska (American Mary, Dead Hooker In A Trunk, See No Evil 2, Hellevator).

Andy followed up the success of Dysmorphia with short film projects Split, INK and Remnant before contributing to 2016’s Women in Horror Month Massive Blood Drive and being commissioned by Crypt TV to produce the micro short She Lay at His Feet. Andy is now working towards his first feature project.

For more information, interview requests or for further press enquiries, please contact David or Andy directly at the details below.