In September 2015, Undead Burrito Productions released the first ten episode season of its original web series Brains. The series follows college neuropsychology student Alison Sumner as she navigates the dating world post­zombie apocalypse. We got the opportunity to ask Marshall Taylor Thurman, who plays Damian Phillips, some questions about this awesome web series and more…

-PH: How did you become involved with “Brains?”

-Marshall: I was actually one of the only people on the “Brains” team who had no initial connection to anyone else on the team. I just sent in my audition tape, came in for the callback, and was lucky enough to be cast.

-PH: Is this the first horror related project you’ve been involved in?

-Marshall: I’ve been involved with some projects that were horrific experiences, but Brains is my first project in the horror genre.

-PH: You play the love interest of the lead character Alison. Tell us a little more about your character. Are there any similarities between your character and yourself?

-Marshall: Damian is Alison’s love interest, but he is also the head of the campus security task force and is extremely focused on protecting his fellow students and survivors. Damian and I are both very focused and determined people; however, Damian is much more introverted and reserved. I am much more of a people person and a goofball. 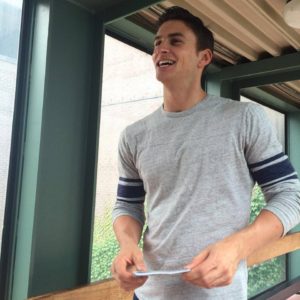 -PH: Damian starts off kind of serious and focused on the zombies, but slowly starts to change as it goes on. What were your initial thoughts on your characters progression when you read the script?

-Marshall: I found it very compelling that, despite his serious and focused exterior, Damian was still, almost unconsciously, drawn to Alison and was very susceptible to her attempts to open him up. I loved that despite his chilly exterior, which would otherwise be at odds with Alison’s personality, he still recognized a kindred spirit in her: someone who is just as determined to help get the campus back on track (albeit in her own way). It was fun to have high stakes of the plague, while at the same time playing the conflict of this new attraction.

-PH: Lots of the people involved with Brains hold more than one role in the production. You directed one of the episodes in season 2. Tell us about that experience, and have you done anything like that before?

-Marshall: I have directed theatre before, but this was my first time directing for the camera. I had a blast working with the Brains team in a completely new way. We have such a talented crew that are capable of anything you throw their way, and it was great to experience that from behind the camera. It was also a great lesson in trust for me as a collaborator: I can come in with my initial ideas and direction, but the joy is getting to see what the team does with those ideas and how we create together.

-PH: What can fans of the series expect from season 2, and in particular your character?

-Marshall: We return to the high stakes and apocalyptic dangers of season 1, while at the same time, getting to go deeper with all of these characters. Damian even gets the chance to loosen up a bit and we get to see the man behind the leader.

-PH: The characters in the story has survived several years into the apocalypse. Do you think you would survive this long if the apocalypse happened?

-Marshall: I am fairly resourceful could definitely make my way in the initial days of the apocalypse, but I would definitely need a community like the one in the show. Working together and having people you can trust and rely on would be essential to make it as long as the characters have.

-PH: Tell us a little something about yourself outside of the series. Do you have another project coming up?

-Marshall: Outside of “Brains,” I am a stage actor, as well as a film actor. This fall, I will be traveling up to Portland, Maine to play Spike in Christopher Durang’s Vanya and Sonia and Masha and Spike (Tony Award for Best Play 2013). I play a vain, up-and-coming actor who is always taking his shirt off (He and Damian would not get along). The role was originated by one of my favorite actors, Billy Magnussen, who was also in The Leftovers, one of my favorite TV shows.

We would like to thank Marshall Taylor Thurman for taking the time to answer our questions. Hopefully this gave you a good look at “Brains,” and gets you ready for season 2. In case you missed it, we also interviewed the creator and lead actress of “Brains” Bri Castellini, which you can read here. If you haven’t seen season 1, please visit the link below to watch it, and get more information on the series.

You can also find out more about Marshall at:

“Primal Rage” Comes to Theaters for One Night Only