Old-school slasher fans take notice, ALL THROUGH THE HOUSE – a holiday horror film – is making its U.S. debut on all major video on demand platforms. Pre-orders on iTunes began September 3, 2016, released by Gravitas Ventures. ALL THROUGH THE HOUSE is produced by The Readmond Company and written/directed by Todd Nunes. To celebrate the gory news, The Readmond Company is giving away signed movie posters to the first 100 iTunes pre-orders at www.allthroughthehousemovie.com.

Hot off the festival circuit, ALL THROUGH THE HOUSE has received 20 awards and nominations including Best Slasher and Audience Choice Award (RIP Horror Film Festival, Hollywood), Best Director (Hardcore Horror Fest, Chicago), and Best Local Feature (Another Hole in the Head, San Francisco). The 80s-style slasher is gearing up for domestic release on October 4, 2016.

SYNOPSIS: Fifteen years ago, a peaceful Christmas neighborhood was engulfed by fear when five-year-old Jamie Garrett was mysteriously taken from her bedroom never to be seen again. Now on Christmas break, Rachel Kimmel comes home from college to find her neighborhood struck again by a reign of terror. A violent killer is hiding behind a grisly Santa mask, leaving a bloody trail of slaughtered women and castrated men to the steps of the Garrett house. Rachel finds herself in a horrifying nightmare as she discovers the twisted secret behind the mask. 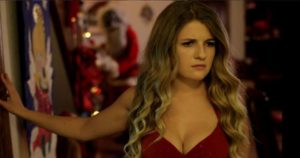 – “All Through the House is the perfect stocking stuffer, the perfect present under the tree. It’s an unpredictable gore fest filled with holiday cheer and unadulterated horror” – HORROR SOCIETY

– “All Through the House is just what we needed this holiday season, definitely Christmas in spirit and one-hundred percent horror” – WE ARE INDIE HORROR

– “This film is one of the most brutal, entertaining and downright fun slasher films I have seen in quite a long time. Fans jaded by the slasher genre seriously need to check this one out as soon as possible” – FRIGHT METER AWARDS

ALL THROUGH THE HOUSE was shot in 21 days in the summer of 2014 in Los Angeles, San Francisco, and Lake Arrowhead, CA. Director/Writer Todd Nunes graduated with honors from The Los Angeles Film School and studied screenwriting at UCLA’s Writers’ Program. This is the first film by Los Angeles-based The Readmond Company.