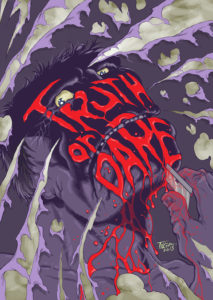 Tim Ritter’s 80’s horror hit, “Truth or Dare”, is set for a limited edition Blu-Ray release via SRS Cinema – a first ever for this cult classic! The movie, which Elijah Wood often refers to as his all-time horror favorite, has sustained the test of time as a favorite among fans of camp horror. The plot follows a hapless man who discovers his wife is cheating on him, and the subsequent madness from the betrayal sends him on a vicious killing spree.

“When an already unbalanced Mike Strauber catches his wife Sharon in bed with his best friend, the result is a rapid descent into insanity. Mike’s revenge is masked in the form of the seemingly innocent child’s game “Truth or Dare”, but playing his demented and twisted version results in a bloodbath the likes that has never been seen before… with a trail of victims leading right back to his wife! This all-time horror classic from 1986 includes a special performance from a young AJ McLean of The Backstreet Boys. “One of the ‘Top 13’ Slasher Movies Of All Time!” as ranked by Top13.com.”

Pre-sales start this coming Friday, 9/16 @ 7pm EST. Copies are expected to start shipping in Mid-October – just in time for Halloween viewing. For over a year, SRS and Ritter combed through potential leads to track down the original camera negatives, but it appears they are lost forever. So PLEASE NOTE, the master is being created from the best analog source available – a ¾” and Betacam SP master. SRS though has been getting some amazing results from analog masters for their popular limited edition releases, with releases like “Gorotica”, “Live Feed”, “The Snuff Tapes” and more earning the highest of marks and praise from fans. “It’s not the ideal situation”, explain SRS president Ron Bonk, “but we are using the best possible source, transferring it with great care, putting it on the best possible public viewing format, and they’ll be watching it via blu-ray players and HD TV’s, so it will look better than they have ever seen before.” The disc is expected to include some all new extras as well.

GRAB THE BLU-RAY HERE ONCE AVAILABLE

Watch for new stills, a new trailer and more to start appearing in the weeks to come.