Crypt TV is poised to find up and coming horror books, and we have one of them right here… 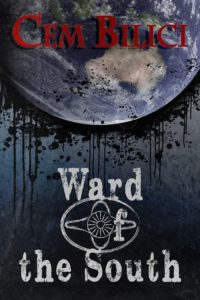 Coming home to find her boyfriend and girlfriend missing and a strange man in their living room, Stacey Trampler is attacked by shape changing creatures. Escaping with the aid of that man, Stacey finds herself at the centre of a hidden order of powerful men and women, the Wards.

The Wards use their power to protect humanity from the shadows, destroying those creatures, the umbra, wherever they can.

But now, something has changed. The umbra have changed.

Led by a humanoid umbra that Stacey names the Shadow Man, the Wards are on the defensive from creatures who they once considered wild animals.

Amid the chaos, somehow Stacey has to keep herself alive and find her lovers. To do so she has no choice but to join the Wards and apprentice to the stranger who saved her. But what is he hiding, and what do the Shadow Man and the umbra want with Stacey?

“This is urban horror with plenty of spit, grit, and shadowy monstrosities. There are a whopping 11 chapters already available to read on Ward of the South’s project page, so settle in with a mug of something dark and bitter and lose yourself in Cem Bilici’s world.”

Where did the idea for ‘Ward of the South‘ come from?

Author Cem Bilici says it, “started as an idea that I had one very tired day as I walked to buy baby formula. The path I was on was paved and fairly level. But I stepped on something that I hadn’t seen, and it felt so out of place that after a few steps I turned around to see what it had been. There was nothing there.

Sleep deprivation does funny things to your brain, but that can be a boon as well as a curse. My mind raced to invent the possibilities, and being a horror reader and nerd of course Lovecraftian-ish creatures crept their way in.

I ended up with a story with a late middle-aged white dude and wise-cracking younger female side-kick whose boyfriend and girlfriend are taken by said creatures–who it should be known does NOT become his love interest in any form. I had finished a freakin’ novel! I put it aside and let it ferment.

I creased my brow. The “sidekick” was kicking up a sh!t-storm. I still have the Doc Marten boot prints on the inside of my skull. No, sir, she didn’t like it!

So I took to editing the manuscript with digital pen. Then carving knife. Then machete. I blazed that trail until she put her booted feet up, lit a cigarette and through a lop-sided grin said, “That’ll do, pig. That’ll do.“

It’s OK. I put her through hell and back. Several times. And I plan to (hopefully) do it another 4 times, at least…”

As you can see Cem put a lot of work into this book, and he’s ready for horror fans to sink their teeth into it!

It’s available to pre-order right now with extras like…

-A signed paperback copy of the book

–Your name in the back of the book

Read chapter 1 and pre-order now at:

Not only will you get this terrifying book and those extras, but you’ll help it win The Crypt TV Collection Contest! ‘Ward of the South‘ will have opportunities to develop into other media, such as movies, TV series, and digital productions.

He is also finishing his steampunk adventure novel, The Mechanical Turk, an Ottoman inspired alternate history, while working on his third novel, Gavin the Vampire, a geeky comedy that subverts the usual tropes.

-Get a closer look at Cem’s bio