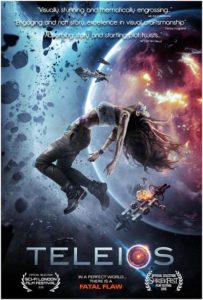 Teleios stars Sunny Mabrey (Species III, “Once Upon a Time”), Michael Nouri (Flashdance, “Damages”), Lance Broadway (Olympus Has Fallen), TJ Hoban (“It’s Always Sunny in Philadelphia”) and Mykel Shannon Jenkins (“The Bold and the Beautiful”). A rescue mission for one man turns into a battle for survival as the “perfect” rescue team starts to fracture.

The deep space mining vessel Atromitos has been adrift for two years. It is suspected that most of the crew had brutally killed each other for reasons unknown. Genetically modified “superior” humans are sent to investigate the marooned ship and recover the only survivor. Under the stress of isolation in outer space, the crew begins to exhibit unexpected character flaws. Cracks appear within the group which threaten the success of the mission and their chances of getting home alive.