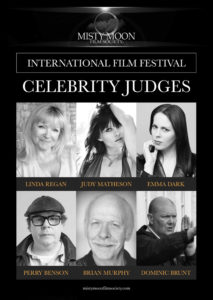 Get in the Halloween spirit early on Saturday 29th October and celebrate a day of film and filmmaking at this year’s Misty Moon International Film Festival. Set within the atmospheric surroundings of London’s The Cinema Museum, the Misty Moon Film Society presents a day of classic/horror feature films followed by an evening showcase of high quality short films from around the globe. A celebrity guest panel of classic/horror film and television stars will judge the short film finalists.

Festival organisers the Misty Moon Film Society are keen promote new filmmakers, artists and performers and give them a supportive platform within the industry. Director Stuart Morriss had this to say about the event: “Misty Moon has always been on the dark side of things especially in our art and films. We have always been a platform to promote all areas of creativity and The Misty Moon International Film Festival is a legacy started by Friday the 13th’s Adrienne King and myself four years ago. Misty Moon where art and film collide…”

Throughout the day the festival will be screening a selection of cult horror films with Q&As from the actors and directors:

The main festival starts at 7pm and the short film finalists will be screened with the judges giving their feedback between each film. At the end of the screenings the audience will be asked to vote for their winner. The winner will then receive the trophy from the judges.

Tickets for the first three film screenings in the afternoon are £5 per film.

The screening of Before Dawn and the main evening film festival are free. Advance tickets may be purchased from Billetto (http://bit.ly/2dUOQt1). Or direct from the Museum by calling 020 7840 2200 in office hours. 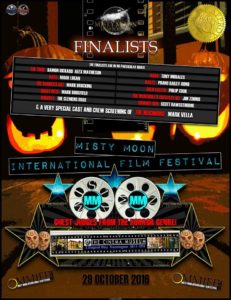 This year’s judges include:

Judy Matheson – Actress (Twins of Evil, Lust for a Vampire)
Perry Benson – Actor (This is England, Sid and Nancy)
Brian Murphy – Actor (Last of the Summer Wine,George & Mildred)
Dominic Brunt – Director/Actor (Bait, Inbred, Emmerdale)
Emma Dark – Director/Actress (Seize the Night, Island of the Blind Dead)
Linda Regan – Actress/Author (Hi-De-Hi, Quadrophenia)
There will be a chance to meet the judges during the evening.

The short film finalists are:

Plus a very special cast and crew screening of The Neighbours – Director Mark Vella.

The evening’s main event will also see the premiere of horror-comedy short film Count Frankula directed Jason Read of Robo Films and produced by Stuart Morriss of the Misty Moon Film Society. The film is written by and stars David Barry of Please Sir! and The Fenn Street Gang as ‘Count Frankula’ himself. It also stars Hammer actresses Caroline Munro and Judy Matheson, indie actress and filmmaker Emma Dark, and newcomer Martin Rudman.

The Count Frankula trailer can be viewed here: