Eight men are gathered at a failing Brooklyn Gentleman’s Club one stormy October night to hear the last will and testament of their late colleague, Lars Van Eyckmann…within three days – on Halloween Eve – they will find themselves pitted against each other at the Van Eyckmann estate up in Wyvern Falls and unwitting pawns of the horrifying truth behind Van Eyckmann’s Request: a family curse originating from terrible atrocities committed in the Dutch East Indies Spice Trade of the early 1600’s. Their only chance to survive the night lies with John Easton, a CID detective with the Royal Turk and Caicos Police Force who must first face a few uneasy ghosts in his own closet… A supernatural mystery set against the rich tapestry of Dutch Colonial History and the Hudson River Valley, ‘At Van Eyckmann’s Request’ will keep you guessing and jumping – a classic Halloween haunted mansion tale with an ‘Arabian Nights’ twist.

Welcome back to the village of Wyvern Falls…here along the Hudson in that sleepy region with the witching influence in the air. In this second installment of the ‘Hudson Horror’ series, ‘The Feast of Saint Anne’ brings you not one but four terrifying tales of the supernatural set in their yearly carnival:
In “The Red Baron’s Daughter” two boys get more history than they bargained for when a Fortune Teller draws them into the web of a monster with its origins in the deadly skies of the Western Front, circa 1918. Can CID detective John Easton save them from an even grimmer fate?
With ‘The Lonely Dancers’ an upcoming band finally show up for their gig – thirty years after they were killed in a tragic accident. Will local musician Nick Carr unravel this murder mystery or is he doomed to relive their tale?
“Lorenzo King and the Dunderberg Imp” takes a new spin on an old Washington Irving classic when a failing New York media hound finds himself in the worst, and deadliest, assignment of his life. But can he outwit this much nastier version of Irving’s river goblin and show everyone who the King really is?
In the final tale, “Hey Dummy!” Jim Franks and his girlfriend cross paths with what appears to be an old-fashioned vaudeville act. Only neither ventriloquist nor dummy are what they seem and the answer to their awful secret lies over sixty years in the past with a New Guinea witchdoctor…

Some nightmares refuse to stay dead…

In the sleepy Hudson River village of Wyvern Falls, something dark and corrupting is re-emerging from the shadows, a secret cult seeded by the infamous Aleister Crowley that was supposedly struck down on the eve of the Great Depression:

The Sacred Order of the New Golden Dawn

With them will come nightmares and chaos, opening portals to horrifying dimensions . . .

By Summer’s Last Twilight.
A new chapter in Horror has begun

Now brings you his latest novel…

In the aftermath of a major hurricane, a massive antique crate washes up on the shore of Raadsel Point. It’s smuggled cargo from the wreck of the Edmund Wood, an unregistered transport returning from a very unusual expedition. . . a ship that went down in the deepest and most dangerous part of the Hudson known as ‘The World’s End’. The nightmare creature it contains is about to unleash havoc on the citizens of the sleepy river village of Wyvern Falls and inadvertently draw to it a predator thought extinct a millennia ago. It will come down to two people to figure out what both these creatures are and how to stop them: expat CID Detective John Easton and American Indian anthropologist Sarah Ramhorne. The two of them will have to unravel local Indian myths, outmaneuver a corrupt mayor, a failing Ancient Astronaut Theorist TV show and an overzealous Green Folk Festival if they are to stand any chance of saving the day. 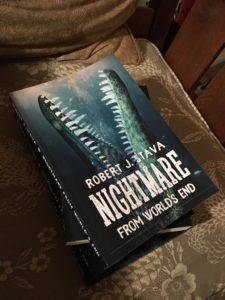 “The Nightmare from World’s End is more than just a thinly plotted tale designed to throw blood and guts at the reader. There are several elements of the story that sets it apart from most, and it wasn’t until I finished the book that the author gave the insight as to why.”

“The “Nightmare” is filled with some Indian myths, some corruption and an overzealous Green Folk Festival. Don’t know what a Green Folk Festival is, then you have all the more reason to find out when you get and enjoy-if “enjoy” is the right world for a tale of horror-but it is-Robert J. Stava’s Nightmare at World’s End.”

“Robert J. Stava shines because he writes what he knows. ‘The Worlds End’ is an actual location along the Hudson River, near where he lives. ‘Nightmare’ takes place in a half-imaginary universe as some of his other works. His life-long fascination with beasties that lurk beneath the calm waters gives birth to two sea monsters worthy of a great read. Much research went into some of his character development, which gives them a spark of life that keeps you interested.”

“If you’re looking for a salty read and aren’t scared of a 6 ½ foot mouth swallowing you whole, I highly recommend this book.”

“I raced through Robert J. Stava’s Nightmare from World’s End because like all of his books I wanted to find out if the good guys survive. But I won’t give any spoilers away. For that I advise you to download the book yourself (only $3.99, come on you can afford that!) and find out what’s going on in Wyvern Falls an unusual town up on the Hudson River.”

Yes, get your copy today at: 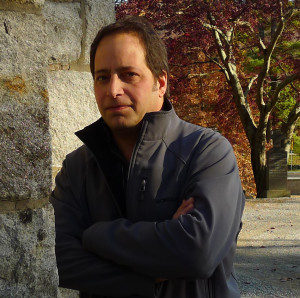 Robert Stava is a writer who now lives in the lower Hudson Valley just north of NYC, apparently not far from that half-imaginary village he sets so many of his stories in, Wyvern Falls. Originally from Cleveland, Ohio, Robert had a successful career in advertising (Y&R, J Walter Thompson), 3d graphics and performed for 8 years on the NY Music scene with his band, ‘The Jag’. These days he focuses on local legends and history of the Hudson Valley.

His first novel “At Van Eyckmann’s Request” was published in 2012. He is also author of the novels “By Summer’s Last Twilight” and “The Feast of Saint Ann” which has found its way into the hands of such eminent authors as T.C. Boyle and Ann Rice and has also been previewed by acclaimed novelist & screenwriter Michael Marshall Smith who commented: “I loved it…as if I was being pulled into a Ray Bradbury or something like BOY’S LIFE.”. His novella “The Devil’s Engine” was published by Muzzleland Press in 2015 and his short stories have appeared in various anthologies including “Kill for Copy” (Dark Chapter Press) & “Legends of Sleepy Hollow” (Nielsen Press). His fourth novel, “Nightmare From World’s End” was published by Severed Press in 2016.

He is also author and designer of “Combat Recon: 5th Air Force Images from the SW Pacific 1943-45” (Schiffer Publishing, 2007), a historical account based around his great uncle’s service as a combat photographer during WWII.

He has also been called by writer Hunter Shea ‘The King of Hudson Horror’.