Written and Directed by Manny Serrano (Blood Slaughter Massacre, M Is For Mastectomy), the heady psychological horror Theta States, is about Danny (Ryan), who is given a binaural wave generator after visiting hypnagogic therapist Dr. Zovnig (Tom Coll) for help with his long-term insomnia. After years of dealing with this affliction, Danny can finally sleep normally, only for his dreams to be plagued by shadow creatures and succubi. 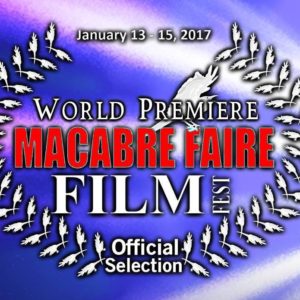 The World Premiere takes place on Friday, January 13th at 8:30pm, in Room D. Theta States is nominated for 5 awards including Best Screenplay, Best Editing, Best Sound, Best Soundtrack, and Best Actor for lead Thomas Ryan, who previously won Best Actor at Macabre Faire in 2015 for his film Faces. Writer/Director Manny Serrano, Producer Lindsay Serrano along with the cast & crew will be in attendance for the screening and Q&A, and the Roast of Thomas Ryan at midnight!

In addition to the premiere, the festival features many filmmaking panels, including panels on Cinematography with Manny Serrano and Patrick Devaney at 12 noon on Sunday, and Pre-Production “Homework Before The Filming Begins” with Lindsay Serrano on Friday at 6pm.

Vortex Media, Super Channel and Blood in the Snow Film Festival Release Trailer for ANYTHING FOR JACKSON