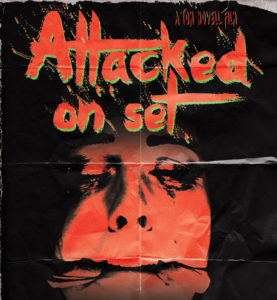 This is more than just a film about a killer on the loose. “ATTACKED ON SET” IS AN EXPERIENCE! It started out with three guys setting out to see how much they could do, with the constrains of a recession and a national economic meltdown. The whole process, from the idea draft to the rewrite on the walls of the office, was completed in six months between producing commercials, music videos and dealing with the wacky schedules of everyone involved. The project was written and directed by Tom Novell (Return of the Skin Eaters — Director of the year 2011) and includes work by Director of Photography, Joel Warren and, Executive Producer, Forrest Warren.

“Attacked on Set” promises nothing but a hair raising good time. It’s the perfect cult film to watch over and over when you have the need to be squeezed! Laugh at it because it is campy…scream at it because it is scary…it’s meant to purely entertain you. 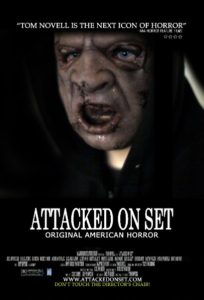 Synopsis: A group of young, hot new actors and crew move production to a new studio in a remote area of a Midwest town. All of your favorite characters are here! Little did they know but the killer has a score to settle when everyone on set is stranded in the remote studio with a van that has run out of gas and no cell phone service. No one is immune, not even the tree hugger, land developer or news crew covering a nearby construction project infringing on the habitat of an endangered bird species. Just when you catch your breath from steamy on set encounters, you will be gasping for air when the killer picks off the crew one by one and carves up their bodies for his own deviant pleasures. Just when you believe all is lost, the heroics of the local cop changes the plans of the killer (or is he acting alone?). “Attacked on Set” is a horror comedy that is sure to have you squirming in your seat, covering your eyes and laughing out loud. When these girls lay down, things stand up. “Attacked on Set” is a perfect mixture of comedy, gore and campiness with lots of boobs and blood”.

The project was written and directed by Tom Novell (Return of the Skin Eaters — Director of the year 2011) and includes work by Director of Photography, Joel Warren and Executive Producer, Forrest Warren.

BluRay Combo Pack will be listed on Amazon.com on March 21st

Supernatural Irish Horror BEYOND THE WOODS is Waiting 19 February