Just two of the quotes from the intense flurry of interest after the release of the Night Kaleidoscope trailer last year.

Fresh from its preview screening at the Atlanta Days of the Dead Horror Convention, you can finally watch Night Kaleidoscope on Amazon Prime, buy on Region 2 DVD and even purchase a very limited VHS edition. Region 1 and NTSC VHS and Very Limited Betamax to follow….

Night Kaleidoscope is the third feature from director Grant McPhee, following on from the success of his Post-Punk Documentary – Big Gold Dream, listed as one of Sight and Sounds best films of 2015, an Edinburgh International Film Festival Audience Award Winner and a recent screening on BBC TV. 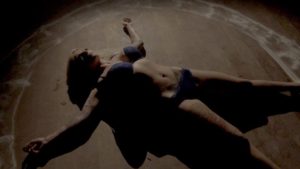 Night Kaleidoscope is a very different film but maintains a similar punk rock attitude throughout.

Bridging a fine line between the trashy 70s Euro Horror of Jess Franco, the British Art-House miasma of Nicholas Roeg and the underground experiments of Kenneth Anger Night Kaleidoscope manages to become a unique film of its own.

The film is a treat for the eyes and ears – trippy, psychedelic imagery flashing against a pumping 80s synth rock score – story and logic come secondary to atmosphere and terror, a dreamy nightmare captured on film.

It is the story of Fion, a hardened psychic detective (Patrick O’Brien) who is happy to work for the highest bidder. His latest case proves to be his toughest challenge yet when faced with depleting powers – which he tops up by smoking a mysterious psychedelic powder – Fion encounters a mysterious wave of murders across the city’s poor and deprived. With the aid of Isobel (Mariel McAllan) their investigations lead them to enter a world of ancient evil in the form of a beautiful but deadly couple – Carrie and Lewis. Set against the backdrop of a decaying city viewed through a Night Kaleidoscope.

Night Kaleidoscope is a brash, bold, surreal, stylish and hip entry to the aging Vampire Genre. One where all rules are broken and is part dream, part nightmare.

Shot on a budget smaller, and a time-frame less than most films have for their trailer, Night Kaleidoscope manages to elevate itself above its limitations by use of imagination and a desire to challenge the perception of Micro Budget Feature Filmmaking.

Night Kaleidoscope is not like anything you’ve seen or heard before.