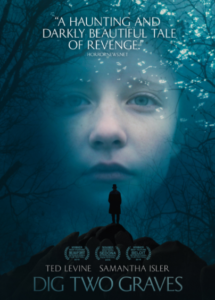 Ann Sonneville (“Chicago P.D.,”) Troy Ruptash (TV’s “General Hospital,” “Prison Break,”)
After 13-year-old Jacqueline Mather (Samantha Isler) loses her brother in a mysterious drowning accident she is soon visited by 3 moonshiners who offer to bring her brother back to life, but at a grim cost. As the dark history of her grandfather, Sheriff Waterhouse (Ted Levine) is unearthed, the true intentions of the moonshiners come to light.

A supernatural thriller about the generational violence that plagues a small, backwoods town, set in the 1970s, DIG TWO GRAVES asks “how far would you go to save those you love?”
DIG TWO GRAVES is written and directed by Hunter Adams. Produced by PJ Fishwick and Claire Connelly and executive produced by Larry Fessenden. Music by Brian Deming, Ryan Kattner, and Joseph Plummer. Cinematography by Eric Maddison and edited by Scott D. Hanson.