Neal Carter wanted Wisconsin to be a new start. After Kaylee’s disappearance, he felt they needed it. With the dream of opening a new restaurant, Neal moves the family to the outskirts of Green Bay, Wisconsin and a new home along a picturesque rural road. Besides, it was too good of a bargain to pass up.

But all is not what it seems along the quiet, rustic stretch of Saint Augustines Road. Kathy, Neal’s wife, is experiencing unexplained problems. She sees, hears and smells what is not there. As the one year anniversary of Kaylee’s disappearance approaches, Neal thinks it is just the stress of having lost her first child, but Kathy is convinced otherwise. And the longer they remain the worse it gets.

Cora Carter is just thirteen and has left the only friends she has ever known back in Ohio. A chance meeting with a Psychic scares her to the core as she is plagued by nightmares and visions that are becoming all too real. Bullied by two girls at school, she retreats further into an ever darker world. In the old barn at the back of the property, she finds an old guitar and a cigar box filled with girls jewelry, while at school she meets a new friend. Together they are all that keep her from going insane.

Little Hannah is the youngest member of the family, she likes their new home and the backyard swing that hangs from the branches of an old oak tree. She likes her new friend too, even if no one else can see her.

As Kathy Carter seeks answers, she turns to the comfort of the old church just down the road. But the answers she finds are too horrifying to believe.

“Once again Richard Tabaka has spun a tale that leaves you spell bound and completely engrossed! You are able to actually visualize the story as it unfolds. The only down side is, as all stories do, it comes to an end. Hopefully we will meet the Carter family once again in the next chapter of their lives! Mr. King move over! There’s a new chill master in town!!”

And after you finish the latest from Richard Tabaka, check out some of his other fantastic titles like… 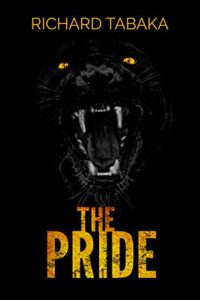 An ancient evil stalks the forests. Humans are on the menu. Will a mother’s love be strong enough to defeat it.

The Pride takes you on a page turning thrill ride with a shocking ending. Or is it just the beginning?

“Wow, what an amazing book. I don’t normally buy horror novels, but this book hooked me just from reading the Preview chapters online.”

“This was truly one of the most amazing and exciting books I’ve ever read. I give this book ten stars. If you only read one book make sure it’s this one.”

“This story is by far one of the sharpest ever written. It is a frightening, action packed, totally believable horror story.”

‘The Pride’ trilogy continues with… 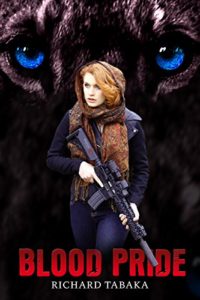 Six years have passed since the terrible events in Wisconsin. Now, Nick, Suzanne, and Heather are thrust back into the fray. Plucked from their new lives in Oregon to Face an enemy they think they know, only to find an enemy so much greater than they could have ever imagined. Tucked away in the wilds of Norther Michigan’s Upper Peninsula, a terrifying Queen seeks to raise her kind back up to the top of the food chain. But she is not the only Queen in this forest. She will face three generations of warrior queens who want her kind dead. It’s all about the blood. Blood Pride picks up where The Pride left off and takes you on a full throttle ride all the way to its shocking climax. It ain’t over til it’s over…and it ain’t over yet!

And the trilogy concludes with… 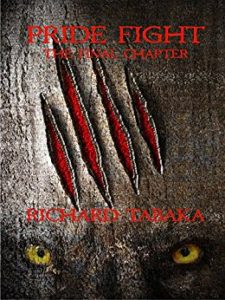 Their tranquil lives have been destroyed. Cassie and Bill have gone missing. The family suspects they have been taken by elements of a Shadow Government known as Black Pentagon, and its leader, General Arthur Lee.

Nick, Suzanne, Heather and Jim, join forces with a handful of friends and an unlikely pair of allies, to take on two terrifying adversaries at once. Deep under the verdant lands of Tennessee, a maniacal General has created a Super Soldier and he will soon have the power to create many more. The General has ambitions. Ambitions to be a God. As he prepares to unleash a deadly plague, an evil Queen holds ambitions of her own, as well as an ancient secret weapon unlike any other.

Driven by the desire to reunite her family, Heather will lead the charge. Pride Fight takes you on a mind bending ride of an America you never knew existed. A world where Shadow Governments and bloodthirsty creatures vie for power. Deep under the everyday America, we all know and love, lies a world of dark ambitions you will barely believe. Evil lurks in the hearts of man and hidden within the world of THE PRIDE!

Also don’t miss out the on the short stories in…

One man’s encounter with demonic forces, two boys go werewolf hunting, a small town is terrorized by a stranger, evil dwells in an average home, A man comes face to face with death. Five tales of horror from Richard Tabaka.

“Each of the stories this author tells is sewn together with palpable tension, a strong sense of foreboding, and a constant feeling of terror looming throughout each page.”

“If you love horror stories that are told with a hint of thriller style writing then you’ll love these stories! Don’t be surprised if you decide to take an extra look down the hallway tonight when you go to bed however.”

“Tension starts to build from the very first page…”

Richard Tabaka lives and works along the banks of the Wisconsin River. Since his boyhood days watching horror movies at the local theatre, he has been a fan of all things horror. He would race home from school to watch Dark Shadows on TV or to search the mailbox for the latest issue of Famous Monstes of Filmland. While the stories of Edgar Allan Poe sufficed as a boy, he learned of still more horror authors like Derleth, Lovecraft, Block and Masterson. Soon, names like King, Koontz and Herbert filled the shelves of his library. But he wanted more. Deep inside himself, Richard knew there were stories of his own and now, dear reader, he brings them to you. Are you afraid of the dark?

Visit http://www.tabakahorror.com for information including…

-More details and reviews of his books