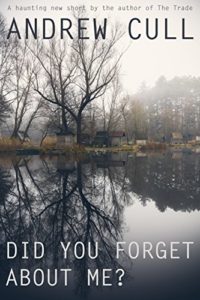 “Did You Forget About Me? packs a surprising punch. Being short, it still holds a relatively slow-burning wick, building on childhood turmoil to offer a sense of impending dread.”

“I loved it! Highly atmospheric and thoroughly unnerving read.”

“I enjoyed the experience and that Cull makes effective use of his filmmaker’s eye for detail.”

“Did You Forget About Me? had something that’s been missing in a lot of books I’ve been reading recently and that’s “atmosphere.” Recommended.” 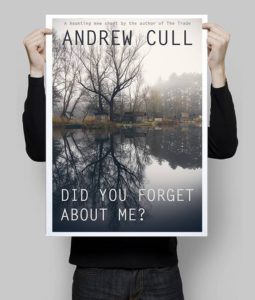 In a recent interview, author Andrew Cull talks about how this story came to be…

““Did You Forget About Me” was inspired by an email I got from a friend back in the UK. It was a scan, of a cutting from a newspaper, that purported to show evidence of an urban legend that we’d been terrified of when we were kids…

“Now, the image I’d been sent had been shot by a Google mapping drone, and it shows a dark shape on the bank of one of the lakes near the estate where we lived. People were questioning whether this was ‘The Bloated Man‘. The Bloated Man was supposedly the corpse of a man who’d drowned in the lake years before. The story goes that his corpse hunts along the shore of the lakes at night, looking to drag people down into the water with him. When we were growing up we’d dare each other to go the lakes at night. I remember a few bloody terrifying walks around those lakes when I was about 11.”

Don’t wait, get your copy today at:

And after you enjoy that great read, check out…

That summer should have been filled with laughter, with slip n’ slides in the yard, lazy afternoons lying watching ice cream clouds swirling through the blue sky, melting in slow motion. I watched a plane rising high above our house. From the ground it looked completely still, as if it hung suspended in the air, a model on a string. I wished I was on it, I wished I could escape. I was seven and that was the summer death stalked our home.

It began with the offerings…

“A nice job slowly ratcheting up the suspense, never revealing what kind of creature lurks in the shadows but rather letting our own mind conjure up that beast which we would personally fear most. I also liked how each parent became their own worst enemy creating a heightened sense of tension in the family. Very good book and hope the author has more fine reads coming!”

Andrew’s first screenplay attracted the attention of BAFTA award-winner, Philip Saville. He went on to develop film projects with Hammer Films, Paul W.S Anderson’s Impact Pictures and wrote for cult TV hit, ‘Urban Gothic‘. Alongside this, Andy ran a video rental store in London with the largest horror collection in the UK.

Andy recently completed his first novel, ‘Remains’ and is in pre-production for his next horror feature.

Andy loves Horror and Hitchcock and, like you, not easily scared.

Visit http://www.andrewcull.com/index.html for more information including:

-All of latest news from Andrew