-Grivante: MASHED is a collection of seventeen stories that are all themed around Food, Sex, Horror & Humor. Most have all of these elements and will have you laughing even as you are horrified by what is happening. The stories are intelligently humorous, at times vicious and others lascivious.

The authors did an amazing job of writing to the themes and creating page-turning fiction.

-Grivante: Surprisingly no. Originally we had planned to cap the anthology at 12-14 stories. We received over 200 submissions and when it came time to make final cuts, it wasn’t easy. Instead of cutting a couple of stories to meet our original plan, we decided to expand the anthology to accommodate these extra, awesome stories. 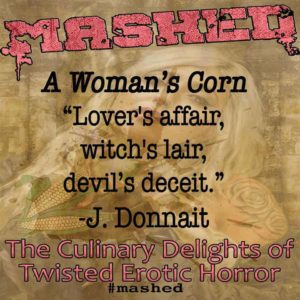 -PH: Speaking of the authors there are 17 different authors with stories in the anthology. Can you give us a little background information a few of them?

-Grivante: We are very blessed to have a mix of both seasoned and new writers in this anthology, as well as authors from all over the world. Some, like authors Steve Carr & John Grey have tons of published works. Others, like R.A. Goli and Darla Dimmelle are fairly new, but have stories getting accepted by publishers regularly. We also have a couple of first time published authors in the anthology with great stories. I expect we’ll be seeing a lot more from them in the coming years.

At Grivante Press we believe that without our amazing authors we wouldn’t have the high quality of work we have to publish and we do everything we can to help promote them, even their work outside of this anthology. You’ll find on our website, www.grivantepress.com, a section for all of the creative people we work with and details on their other projects and where to find them.

We also post updates on our social media whenever one of our creatives lets us know about another publication they are being included in.

-PH: Do they have anything in common besides writing horror?

-Grivante: Some of them are also erotica writers and some are also humor writers. So you’ll find that some stories have stronger sex or stronger humor elements than others but all in some way touch on the four themes. In the end, there at least had to be something in the story that made me laugh to make the cut.

-PH: Your story in the anthology is called “Biscuit: A Love Story.” What’s it about, and how does it fit the theme?

-Grivante: Biscuit is the tale of a baker, Simon, who bakes the perfect biscuit to attract clients into his shop on a busy Saturday. Everything goes exactly as he wanted, except it also attracts some unsavory clientele.

Simon is shocked to the point of madness by what happens and revisits someone who helped him out with a little black magic in the past. He uses this extra ingredient to exact his revenge and keep his biscuits safe for the future.

-PH: Was it fun or challenging to come up with a story with this theme?

-Grivante: Biscuit was actually the genesis for the anthology. I wrote the story, wanting to come up with something that starts as wholesome as a Disney movie, but then goes horribly, horribly wrong. I didn’t know where it was going to go and each new part went in a weird new direction, leaving me both terrified and laughing.

When I completed it, I started looking for places to submit it. I tried a couple of places and realized quickly there wasn’t an existing home for this exact type of work… so, like many of us in the indie space do, I decided to create my own home for like minded folks and MASHED was born.

-PH: Is there something about your story that might stand out from the others?

-Grivante: Each of the stories is pretty unique, but Biscuit is different in the sense that it has three acts. The beginning, where we meet the baker Simon and learn about his magnificent creation and the tragedy that befalls it. The middle, where we flashback to a humorous tragedy in Simon’s life and learn how he knows where to find the black magic he needs. Then, in the final act we meet the purveyor of black magic that sets the stage for Simon’s dark revenge.

All of which may set us up for a very wacky sequel should we decide to do a second volume of MASHED, but shh… don’t tell anyone there might be a Son of Biscuit!

-PH: What are some of your favorite stories in the anthology?

-Grivante: All I can say to that is, the stories were chosen because they were great, all of them. Each has something unique that grabbed my attention and stood out.

There are the amazing and horrifying twists of J. Donnait’s “A Woman’s Corn” & Nicholas Paschall’s “The Tall Man in the Hat”.

And then there are the hot and steamy moments of stories like J.L. Boekestein’s “Nibble, Nibble, My Wolf” and R.A. Goli’s “P.A.C.D. The Kitchen of Tomorrow, Today!”

The stories keep you turning pages! 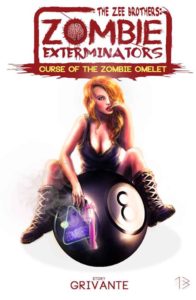 -PH: Besides the anthology, your known for your comedic horror series “Zee Brothers: Zombie Exterminator Series.” For those who aren’t familiar with it, what’s it about?

-Grivante: The Zee Brothers is the story of two brothers and their girlfriend JJ.

The basic premise is that they are zombie exterminators who deal with the occasional outbreak of zombies that happen due to ancient curses, government experiments, the usual zombie stuff. We call it, two brothers keeping the zombie apocalypse at bay, one job at a time.

The brothers are a little bit redneck and prone to creating disasters before they get things under control, which often leads to lots of heart pounding action and hilarious banter.

On top of that, they have this woman in their lives, JJ, who is beautiful and everything either of them could want in a woman. Being brothers, this puts everyone in an awkward position. She likes them both for different reasons and they both love her for all of the same reasons. JJ also has a very mysterious dog, Xanadu, that plays an important role in the story.

The first book is available now with book 2 right around the corner. There will be four books in total along with some short stories and mini comics that tell other pieces of the story in The Zee Brother’s Universe.

In addition to all of the above, there is also a bigger story behind what has been revealed in book 1 and hinted at in book 2 that will come into play in books 3 and the primary focus of book 4.

-PH: Where did the idea behind that story, and it’s characters come from?

-Grivante: The idea behind the story came from sitting in front of a blank piece of paper and deciding to just write until something happened. Before I knew it I had written the line about the “Zombie Omelet” which had me laughing and set the tone for the story. Shortly thereafter the Zee Brothers came into play.

The characters are a hybrid of lot’s of people I have been close to, including bits and pieces of myself as well as my wife who often cosplays as JJ when we do cons.

-PH: Now to something I always like to ask. Where did your love of horror come from?

-Grivante: There were two distinct moments in my childhood that made me fall in love with horror. Both were around the fourth grade. The first, I was just really starting to write and me and my friends were writing “Friday the 13th”(The movies) fan-fiction to try and scare one another. I loved the reactions I was getting from people, that look of horror and fascination. I was hooked on not only writing, but writing the weirdest scariest stuff I could come up with.

The second moment was when a friend of mine invited me over for a sleepover and introduced me to the original Romero “of the dead” Series. This was back in the mid-eighties and I loved them and everything zombie ever since.

-PH: If you didn’t find a liking to horror, do you still think you would have become an author?

-Grivante: Yes. I was an avid reader as a young child and when they started having us write our own stories in grade school, I was hooked. I’d probably write more fantasy and sci-fi, but truth be told the adult I am today really enjoys the dark corners of life, the things that others believe are taboo are just more interesting playgrounds for me.

If it’s weird or makes normal people run away, I’m probably going to want to take a closer look!

-PH: Here’s your chance to promote anything we haven’t talked about. Let us know about any of your other books, upcoming works, or more about Grivante Press.

-Grivante: Believe it or not, we pretty much covered everything that is going on at the moment, though it is going to be a very busy few months launching both MASHED & The Zee Brothers Book 2.

I also have a short story, “The Lies of Dr. Benson” coming out later this year in an anthology called “Mad Like Me” from Insult to the Written Word Publishing

And we’ll be on the road doing cons including Seattle’s Crypticon 10th Anniversary in Seattle, May 5th – 7th. 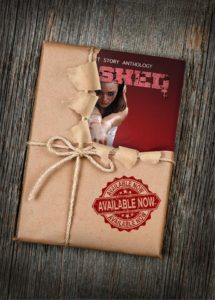 -Visit the book’s Amazon page at https://www.amazon.com/Mashed-Culinary-Delights-Twisted-Erotic/dp/1626760144/ and pick out your favorite story title.

-Email that story title to HorrO@PromoteHorror.com with the subject line “MASHED Contest.” Also include whether you have a preference of a Kindle or paperback copy of the book.