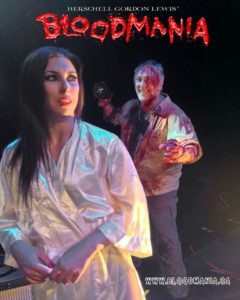 Diabolique Films, ​and HGB Entertainment Ltd​, are pleased to announce that their horror anthology, “Herschell Gordon Lewis’ BloodMania” will make its official debut on Amazon Prime on Friday, May 5th 2017. “Herschell Gordon Lewis’ BloodMania”​ is the final film from legendary horror director Herschell Gordon Lewis, affectionately known as the “Godfather of Gore”, who passed away in September 2016, after a career in film spanning over fifty years. Diabolique Films ​Vice President and HGB Entertainment​ and Producer James Saito had this to say, “It is extremely gratifying that Herschell’s final film can now be enjoyed by his loyal international fan base, and to be able to introduce his work to a whole new generation of horror fans.” The horror anthology film consists of four tales – each representing a different genre of classic horror cinema. Lewis himself described the film as, “… a perfect combination of horror and satirical comedy”. Mr. Lewis wrote and directed two segments. The other two were directed by Melanie Reinboldt and Kevin Littlelight. The anthology stars Roger LeBlanc, Stuart Bentley, Sonia Deleo and Caroline Buzanko among others.

“All of my movies can be traced back to the work of H.G. Lewis”.
Eli Roth ​(Director of “Cabin Fever”, “Hostel”, “The Green Inferno”)

“A new film from Herschell Gordon Lewis is a treat for all horror fans!”
Tom Holland​ (Director of “Fright Night”, “Child’s Play”)