In the world’s saddest place, two strangers meet. But one of them is happy to be there. 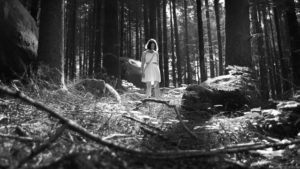 Shot in beautiful black and white across Northern Portugal and Zamora in Spain, The Forest of Lost Souls recalls recent art-house horror hits A Girl Walks Home Alone at Night and The Eyes of My Mother, with its haunting monochrome vision and cerebral approach to genre.

Two strangers meet by chance in ‘the forest of lost souls’, a gloomy, isolated backwater where people go to commit suicide. As they journey into the trees together, the unlikely pair bond over their personal stories of desolation. Once they reach their destination, however, it becomes clear that one has a much more violent reason for being there.

Described by Screen Anarchy as ‘art-house meets the grindhouse’ when it made its world premiere at Fantasporto in February, Lopes’ debut feature blends a melancholy coming of age tale with brutal slasher horror, in one of Portugal’s first ever horror films.

‘Fans of the art-house horror genre…will find much to like in Lopes’ feature film debut.’
Screen Anarchy

‘Lopes really stands out as a young filmmaker who is able to bring together several of his recognisable cinephilic references in order to bring to fruition a personal and carefully crafted debut project.’
Cineuropa 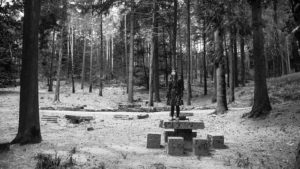 Journey Back to When the Devil was Put on Trial in the True Story of the Ultimate Murder Defense: The Devil Made Me Do It

“The Terror of Bigfoot” Roars into Action from DeadFi Movies