Today, AMC Networks’ Shudder announces its entry into original content. The premium streaming service, known for super-serving fans of thrillers, suspense and horror, is developing six new titles all of which will debut as “Shudder Originals”. The high-caliber original programming slate launches Thursday, June 8 with a new horror documentary from genre favorite Rodney Ascher, titled PRIMAL SCREEN. Other upcoming Shudder Originals include a mystery series; a Ted Bundy-inspired scripted project; and a series based on an Emily Schultz novel, among many others. 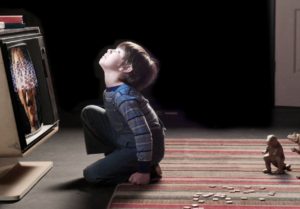 As the first Shudder Original, PRIMAL SCREEN explores how individuals are simultaneously attracted to and repelled by what scares them most. Acclaimed filmmaker Rodney Ascher (Room 237, The Nightmare) has created a singular hybrid of documentary and horror that explores the pop-culture artifacts that traumatized individuals in their youth and the effects it has had on their lives.

“PRIMAL SCREEN is a gripping, unique horror documentary that’s unlike anything we’ve ever seen and we look forward to presenting it to our members as our first ‘Shudder Original,’” says Owen Shiflett, Vice President of Development for Shudder. ”At Shudder, we carefully select every new title added to our library to ensure we are giving our members something beyond what is expected. Expanding into original programming is a natural progression for us, and we’re proud to further enhance Shudder’s offering by bringing our members the vision of emerging and established storytellers who are pushing limits within genre entertainment.”

“Fear, obsession, and people’s attempts to understand these things are a particular focus of mine” explains Rodney Ascher, creator/director ofPRIMAL SCREEN. “Shudder was a fantastic partner and they gave me the freedom to dive deep into this new rabbit hole. I’m thrilled to present Primal Screen on a streaming service that showcases an expansive collection of Mario Bava films, a wide selection of horror-documentaries and a great variety of thrilling entertainment.”

Shudder is developing the following projects which will complement its growing selection of exclusives and catalogue titles, including:

• DEADWAX – A short form series about the hunt for a mysterious record that drives its owners mad… and kills anyone who dares to play it. From Graham Reznick, co-writer of Until Dawn and director of I Can See You.
• RIPRORE – In the heart of gangland Los Angeles, a gruesome discovery sparks a frenetic Homicide Investigation; but underneath the surface lurks a darkness that leads to the end of days. From by Sam Sheridan (former MMA fighter and Author of A FIGHTER’S HEART and THE DISASTER DIARIES) and with Patty Jenkins attached.
• THE BLONDES – A woman treks to find the father of her unborn child, while navigating a world where blonde haired women could turn into rabid monsters at any moment. Based on the novel by Emily Schultz and executive Produced by J. Todd Harris, Marc Marcum and Branded Entertainment.
• UNTITLED ARKASHA STEVENSON PROJECT – A serial killer series loosely based on Ted Bundy and his relationship with his long-time girlfriend, written and directed by Arkasha Stevenson (Pineapple).

Shudder’s commitment to the genre audience and its creators remains at the forefront of initiatives that extend beyond its library. This summer, Shudder kicks off the second annual Shudder Labs workshop in the U.S., which fosters connections amongst established creators with a new generation of innovative creators who will continue to shape and innovate the genre. This year’s workshop will be led by Masters-in-Residence Mike Flanagan (director, Ouija: Origin of Evil, Hush, the upcoming Stephen King adaptation Gerald’s Game) and Nick Antosca (screenwriter, Channel Zero, Hannibal, The Forest, and will be held June 11-15 at the Mohonk Mountain House in New Paltz, NY.