The Mothman of Point Pleasant is a new documentary examining one of America’s most notorious urban legends hits DVD, Amazon and Vimeo OnDemand this Friday. An iTunes release is also scheduled soon after. The Mothman was a bizarre, flying, red-eyed creature that stalked rural West Virginia during 1966 and 1967. The creature was seen by as many as two hundred people before the collapse of a bridge spanning the Ohio River during December of ’67 signaled the end of the sightings.

The new film is being hailed by critics and cryptozoologists alike. Author and museum curator Loren Coleman called it a “benchmark film”, while Horror Society’s Michael DeFellipo called it a “must watch” documentary and referred to it as a “terrifying time capsule”. Dozens of positive reviews from various members of the press and media have also come in. 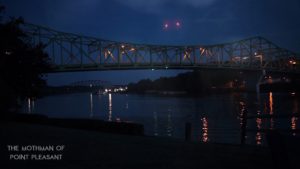 The Mothman of Point Pleasant is the fourth film from Seth Breedlove and crew at Small Town Monsters. Seth and team begin shooting their fifth movie, Invasion on Chestnut Ridge, this coming weekend with an eye toward release on October 20th. The “Mothman” DVD is available through shop.smalltownmonsters.com and a trailer is available…

The 20th Annual Shriekfest Announces its Dates and Reveals a New Poster!