A Beginner’s Guide to Snuff
“Making it in Hollywood Can be Murder!” 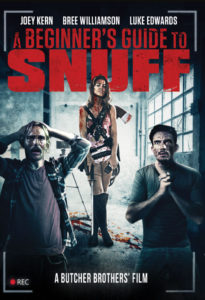 The Butcher Brothers – Mitchell Altieri and Phil Flores – have completed their disturbing horror film, A Beginner’s Guide to Snuff. Darkly comedic, the film stars: Joey Kern (Super Troopers, Cabin Fever), Luke Edwards (Jeepers Creepers 2, The Wizard), Bree Williamson (True Detective, Haven), Brad Greenquist (Lone Ranger, Water for Elephants) and many others. The film involves shooting a fake snuff film, to make one woman famous. But, the plan goes off the rails, from the get-go. A preview of A Beginner’s Guide to Snuff and its summer release is hosted here.

The story opens as two brothers, Dresden (Joey Kern) and Dominic (Luke Edwards) enact their scheme. Together, they decide to kidnap Jennifer (Bree Williamson), in the name of infamy and to make the greatest film of all time. The kidnapping quickly goes downhill. Now, the brothers find themselves being hunted by a raging actress, with an arsenal at her disposal.

The Butcher Brothers are best known for their work on vampire thriller The Hamiltons (2006), The Violent Kind (Sundance) in 2010 and they already have their next film finished – The Night Watchmen. Their latest production, A Beginner’s Guide to Snuff, has already won several awards, including: “Best Actor,” “Best Actress,” and “Best Feature Film” at FearNYC. The film opens theatrically in June before Indican Pictures delivers this title, to horror fans, through Video-on-demand and on DVD – this July. More details on the summer release of A Beginner’s Guide to Snuff are hosted here.

A Beginners Guide to Snuff [OFFICIAL TRAILER] (2017) from Indican Pictures on Vimeo.

More details on the film are available at Indican Pictures: