Three female filmmakers in Vancouver (aka “Hollywood North”) are hoping to take what they’ve learned on big studio productions to the independent film world for their short slasher film CAMPING TRIP – which they are currently running an Indiegogo campaign for.

With a crew of approximately 70% women, their twisted story about a romantic RV trip gone wrong aims to subvert stereotypical female representations in cinema. Their $10,000 fundraising goal will go towards paying for everything from locations to special effects makeup.

In conjunction with their fundraising campaign, the team is currently going through the casting process with up-and-coming Vancouver Casting Director Tina Marie (ATALANTA). They have already had a number of bites from actors around the world – including Ben Fransham (WHAT WE DO IN THE SHADOWS). They will be announcing casting choices at the end of the month. 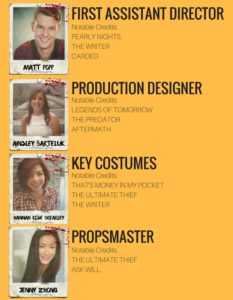 Writer/Co-Producer Zlatina Pacheva (DEAR DIARY, THE DEVOUT) and Co-Producer Jaden Braunwarth (THE PREDATOR, SHUT EYE) are big fans of the horror genre, and are excited to bring this project to fruition. “Our team naturally came together and when we found out that our Director, Amy McLeish (EVERYTHING, EVERYTHING, THE PREDATOR) had studied the representation of male and female serial killers in university, we knew it was a perfect match,” stated Braunwarth. “We can’t wait to share this twisted, gory story with you!” she adds.

CAMPING TRIP will be shooting September 9 and 10 in Vancouver and surrounding areas.

The Indiegogo campaign for Camping Trip can be found here, along with the pitch video and additional information: