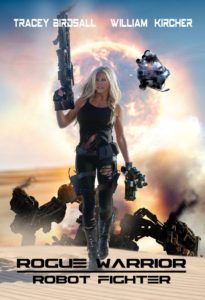 From TV soaps to meaty dramas, supernatural spookfests, romantic comedies and now science-fiction blockbusters, Tracey Birdssall seems intent on showing the movie universe she has no limits. The star of Dawn of the Crescent Moon and tells us about her latest accomplishment, playing the heroic robot-fighter at the center of Rogue Warrior : Robot Fighter.

-PH: You’re best known for your TV work yet you’ve spent the last few years doing science-fiction movies – how did that happen?

-Tracey: When you’re an actor, the process if often a combination of making choices between what we want to do and the opportunitie we have. Television work is a blast, as is film. As the opportunities for film projects increased – the Science Fiction element was very exiting to me. I chose to make this transition; however, I also chose to work across the genres in order to stay relevant across them all. That’s why you see a variety of films in different genres beling relased this year – it’s an effort well worth it. I guess you would sum it up with “opportunities and choices.” 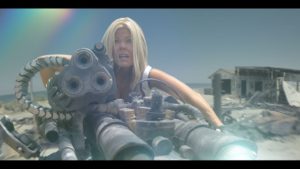 -PH: Would you classify Rogue Warrior : Robot Fighter as your traditionary science-fiction movie … or is it a mix of a few things?

-Tracey: It’s a combination of science fiction of old and science fiction of new and future. We really tried to create something original without forgetting our roots and love of sci-fi. On top of that, it’s a story of humanity and realizations of identity with a science fiction film as a backdrop to humanity. Character driven science fiction is so rare these days, but it made it much more appealing to the names we were trying to work with… so much more fun to bring to life!

-PH: There’s messages in the movie too, I believe?

-Tracey: There are ample messages in the movie which emerged from the story line, and the supporting cast doing such a remarkable job of bringing it all to life. That’s why casting was of the utmost importance in this film – we relied on the talent. 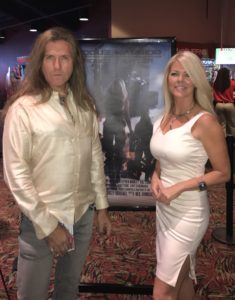 -PH: Is there a particuilar genre you enjoy doing more than another?

-Tracey: I adore science fiction. It was my favorite growing up and is still today. That said, a good comedy is a blast to be a part of – which is why I also chose to do two comdies this year! It breaks up the monotony, gives you a bit of relief, and keeps your versatility relevant.

-PH: Do you think you’ve been pigeonholed at any time doing your career?

-Tracey: I don’t really think so, even for a moment. We, as actors, devise our branding and capabilities and we give everyone 150% in preparation and on set which keeps you working – which keeps you relevant. I think being pigeonholed is a bit of an excuse for an actor who can’t get work across genres. That’s a deliberate decision each step of the way, and one we all have to make for ourselves when accepting each project. It’s not just a paycheck, it’s a career. 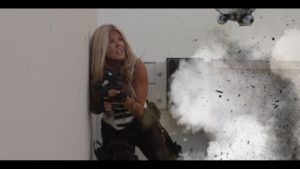 -PH: Was it hard to break free from TV, into the film world?

-Tracey: Film brought me the opportunity to spend not just hours or weeks prepping a character, but months on end. It’s really a remarkable experience to absorb all the details of a character and become them. There’s nothing more enjoyable – although it takes hundreds of thousands of hours to do it meticulously. I’ve done it so many times successfully, however, that I think I could bring that ability and creativity easily back into television when the next oppourtinity arises. Doing film for 6 years straight (back after back) is like a super school of learning to become the character. I’ll do it whatever opportunities I get!

-PH: What did you learn from working on soapies that you’ve applied to your big screen ventures?

-Tracey: I think it’s better to forget most things you used on soaps! The fast pace and re-writes at the last minute, however, have definitely prepared me for working with directors like Neil Johnson (Rogue Warrior). He makes a lot of suggestions and changes on the fly which are really quite easy since I have that background. All of my prior projects have become lessons for my current and future projects. I’m constantly learning and constantly becoming the characters lives I live. Although it’s a job, I thrive on it.

We would like to thank Tracey for taking the time to answer these questions.

Official synopsis: A few decades from now… Sienna, a rebellious robot-fighting arms dealer, lives on a post-apocalyptic Earth. When the cities start to fall under the control of the A.I. Scourge, a hyper-weaponized robot army, Sienna decides to leave the Earth and journey to the centre of the galaxy, seeking a mythical weapon that can neutralize any form of A.I.