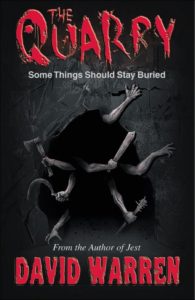 Brighton Publishing proudly announces the eBook release of “The Quarry: Some Things Should Stay Buried” from novelist David Warren. The eBook is now available from eBook vendors including Amazon, Barnes & Noble and other leading book retailers. The print edition is scheduled for a fall-2017 release and will be distributed through Ingram, the world’s largest wholesale book distributor, in addition to worldwide availability through the Espresso book machine network.

Synopsis: Matt Frazer, a middle-aged, single parent is struggling to provide for his disabled son. His job at the Riversbend Quarry pays the basic bills, but the medical expenses are quickly piling up. Life has been increasingly difficult ever since the tragedy that cost his wife her life and his son to lose the use of his legs. One fateful day as they are blasting a previously undisturbed section of rock wall, Matt is shocked to discover that they had accidentally unearthed an entrance of some kind, leading deep into the mountainous wall. A fellow employee ventures into the darkness and returns a few minutes later carrying an object that is too farfetched to be true, but is real nonetheless.

Immediately phone calls are made, an injunction is filed and work is suspended. To look after the quarry’s best interests, Matt is reluctantly thrown in with a makeshift team of archeologists, paleontologists and biologists as they venture far into the tunnel and into depths unknown. What they find as they traverse deeper and deeper into the newly discovered cavern is beyond anything they could have possibly imagined in their worst nightmare.

However, as the discoveries start to become more and more bizarre, the team soon begins to understand that this cavern holds a dark secret, one that has remained buried for over four hundred years. As Matt and his colleagues frantically race back to the surface, they all realize too late that…

…some things should stay buried.

“David Warren does it again with a terrifying story that will keep you locking your doors, in a masterfully crafted work of breath taking turns, terror and suspense,” said Brighton Publishing.

David Warren is the acclaimed author of the thrillers Jest, Replica and Frostbite, which have been praised by critics and fans alike. The Quarry is his fourth published work. When he’s not writing, you can find David attending his local church, playing the piano, reading a good scary book or spending time with his wife and three young children in New Jersey.