“Keeps on the gas until the credits roll” – Beyond The Gore

On VOD this August from Wild Eye Releasing

“Bring your samurai sword” (Horror Buzz) to the chronicle a young woman, half demon/half human who helps a detective rescue his daughter from a demonic cult. 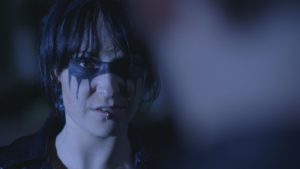 After she is captured by police for questioning in the slaying of a man she claimed was a demon, Taryn Barker must prove her innocence, and the existence of demons. But when a cult captures the daughter of one of the detectives on the case, the police must trust, and unleash, this warrior on the Satantic group who are intent on bringing an ancient evil force into the world.

Niamh Hogan, Alan Talbot, Kevin O’Malley, Nic Furlong, Sarah Tapes Jenkinson, and Margarita Grillis star in a film that “keeps on the gas until the credits roll” (Beyond the Gore).