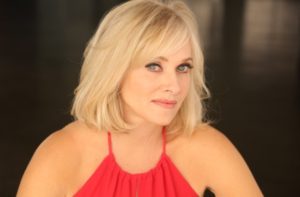 Q: REPLACE raises questions about beauty, body image and growing older, issues that many feel plague the Hollywood movie industry. What is your view on this subject?

The best movies reflect our inner world, our hopes, our good intentions, trials and our demons. Growing old and the fear of death is endemic to all, not just the movie industry. Just when you begin to figure it out your back aches, your skin starts to wrinkle and you gain weight just by LOOKING at your food. Let’s be frank: Aging sucks! But it also gives you a calendar to get things done. If we had an abundance of time we might be sloths putting off everything and accomplishing nothing. To me the best thing you can do is to live in each moment as successfully as possible. That translates to all areas of your life, personal, career and lifestyle choices.

I am not immune however to feeling the anxiety of it all and I do believe most of us lack a grace about allowing nature and gravity to happen. We are collectively obsessed with youth and beauty that’s a problem.

Q: Co-writer/director Norbert Keil says he got the idea for Replace after going to hospital for a back operation. Was that something you could empathise with – the feelings of mortality raised when in such a medical environment?

It wasn’t a medical environment that did it for me but rather a chronic illness. I developed chronic fatigue syndrome 12 years ago after a parasite I had went undiagnosed for 9 months. I was literally in bed for 2 years. The worst time of my life. I was confronted with the fear of the termination of my long term health. Some people live with CFS and never recover. The medical community is still baffled by the syndrome. For me it was quite possibly that my immune system was acting in overdrive, first to rid itself of the parasite and then not being able to turn itself off when the parasite was eradicated. One doctor saved me. Per his instructions I had to become a model patient and test every part of my being: physical, mental, emotional and spiritual. I worked on every system to lubricate every aspect. I actually healed things I didn’t realize needed work. Finally my body calmed down and recovered. At one point though, when I was at my lowest, I thought, “Is this it? I haven’t done enough yet!” After I was better, that’s when I started working harder on everything, including my appreciation for being here. 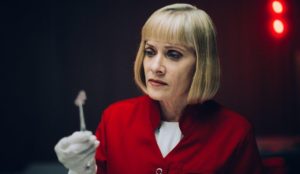 Q: Doctor Rafaela Crober was a part originally written for a man, so what if anything changed in the script to accommodate your feminine side?

Not too much. A few pieces of dialogue here and there. Science is not male or female and the quest for longevity, which is really what Dr. Crober is interested in, transcends gender.

Q: You’ve said you wanted to play Doctor Crober as someone in full control, can you elaborate?

Crober is playing with science too, albeit for different reasons than Kira, her patient. She has to be so sure of herself and where she thinks the journey will take mankind to pursue such lofty goals. Saying more would give too much away if you haven’t seen the film.

Q: Richard Stanley was a co-writer on Replace. Were you familiar with his work and reputation and did he attend the shooting?

Of course, his reputation is legendary. Richard is a fascinating visionary, an artist. He got a very raw deal on The Island of Dr. Moreau. Fortunately people in the industry realize this and he has some great opportunities coming up. Long overdue.

Q: Replace is such a visually stunning movie with a very precise look. How does seeing that magic happening around you colour your performance?

To be honest I did not visualize the movie as it was (in the finished film) while on set. I had a picture in my mind when I read the script that was very subjective to my character. The visuals blew me away when I saw the final finished film. It makes sense though I think, that the visuals are so beautiful and striking, as the movie is from the mind of protagonist Kira. She’s looking for beauty to support the needs of her soul. 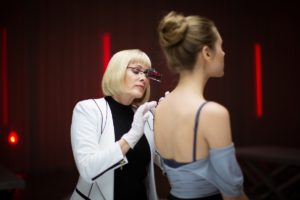 Q: The film has an early David Cronenberg feel, did director Norbert Keil discuss any body horror influences or inspirations with you?

Cronenberg was a very direct influence. And I think the themes of Richard’s work on The Island of Dr. Moreau.

Q: You have now been a guest at many of the world’s fantasy festivals. And this is your second time at FrightFest. Why are these events so important and what makes FrightFest stand out?

I am so grateful to back in the film community and to be fortunate enough to travel to Fests where audiences support and love genre cinema. We are in a transitional period though I believe and festivals for film are one of the only things keeping us alive, supporting new film makers. Film fests are sometimes your only theatrical release so it is of great importance to have your film shown at one that audiences will hopefully love and a distribution company will hopefully buy. FrightFest has a very saavy audience and a very vocal one. You want people to cheer for you and have journalists write a nice review to get distribution companies to make you an offer!

Q: You’re more prolific in the genre than ever. You had four movies showing at FrightFest in 2015 and you have another four in post-production. You are clearly enjoying it more this time around?

I’m having a ball really while enjoying the work in a way I never did before. I’m much more relaxed about my place in the business and I enjoy helping others realize the same dreams I had at a young age. I am invested in each project I work on even if I’m not involved in a producer capacity. I want to help others create the best film they possibly can.

Q: You’ve chosen to be a mentor for FrightFest & MPI Media’s NEW BLOOD Initiative. Is supporting new genre writers an important mission for you?

I am passionate about having the best script possible to begin the journey to creating a film. I do think that too many times the script isn’t as good as it could be and “people” forgive themselves too soon about that and forge ahead with submitting a script or filming without being completely ready. The script is your foundation, spend lots of time on it. I love writers. They have the capacity for insight and understanding of human nature, of people’s vulnerabilities, strengths and desires. When I read a great script with characters I care about, I fall in love with the writer a little bit.

I feel I can help a lot with the development process of a screenplay. Character is story and story is character. The journey that an actor will take in the story is something I am very familiar with and have worked on a lot. The script is the very first thing you begin with, so let’s get that right first. Then we can discuss the importance of making a great first impression with your freshman effort if you want to direct it as well. It used to be that you made a film and people in charge would see “promise” in you and you’d be able to move on to your next movie. That’s becoming harder and harder for a lot of reasons. Make the best damn first film you can.

My friend, esteemed journalist and film critic, Steve Prokopy said to me recently, “20% of all movies are truly great or really awful. The rest exist in a grey zone of average, above average or below average.” What kind of movie do you want people to say you’ve made? Impressions are important on a first date and a first movie.

Q: You’re increasingly becoming involved in films as a producer. Do you feel this is a natural progression in your career?

At this point in my life and career it depends on the project. If I really love something I’ll want to work on it. For me a story needs a strong narrative with an emotional core. That’s what my sensibilities are attracted to. I really love acting and I do enjoy helping others realize their dream.

I have two projects that I’m actively working on to produce. One, I may have an acting part in as well. There are also a few movies which I shot in the last two years or so as an actor only and they are still in various stages of post-production. Hopefully I’ll be seeing you next year on the fest circuit with one of those!