In the tradition of Taken comes the thrilling Never Let Go, on DVD and VOD from Sony Pictures Home Entertainment. 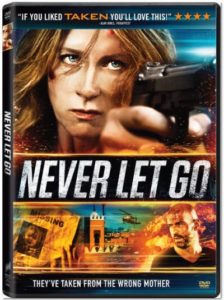 Award-winning actress Angela Dixon (Dead End) stars in a thrilling international action-thriller about a single mother desperately searching for her missing child in a beautiful, but unfamiliar land, following an apparent abduction. Trusting no one, she takes the law into her own hands, weaving her way through the murky backstreets and barren landscapes, now implicated in the murder of a seemingly innocent man, her connections back in the US begin to reveal that there is much more at stake than first meets the eye. 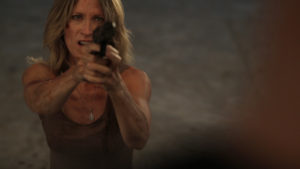 -PH: So, the message of the movie is, ‘stay in your house and never come out, right?’? haha!

-Howard: Ha Ha, yes, you got it. Or as someone has said at the theatrical screening. Coming out to see Never Let Go with a babysitter at home is like going to see Jaws with a shark in the bath!! 🙂 You know a lot of parents have said they have stepped up security after seeing the film, so hey, maybe we can save a life here!!

-PH: How much of the film was inspired by Taken?  Did it’s success pave the way for this movie?

-Howard: It’s such an honour that so many people have said things like ‘Homeland meets Taken’. But I think Never Let Go is totally different – we certainly didn’t have anywhere near the budget of Taken and I was really interested in a mother’s perspective on a missing child story as most ‘Kidnap’ films are centred around men doing all the fighting to get back their child yet they haven’t carried them around inside them for 9 month and painfully birthed them into the world. It’s about time we saw it from a woman’s perspective right?!

-PH: Are you afraid of our times?

-Howard: Well I’m hoping there won’t be a world war 3 and I’m sadly also avoiding crowded places much more than I used to so maybe there is a bit too much fear out there. I made Never Let Go after nearly loosing my own son, whom I though had been abducted from the resort I was staying in, but he was in fact drowning at the bottom of the hotel pool. He only just survived and that got me writing the film. It just fell out of me – in that situation I was super fearful and I wanted to see if I could make a film where that feeling unfolds over 90 minutes..

-PH: Do you think stuff like this happens in real life?And to this extent?

-Howard: Yes I do, and in fact when I looked into the subject matter to research what does go on out there with missing children, the figures stunned me. That’s why I put them on screen just after the opening sequence – a sequence in which my own son is kidnapped. I was going round Morocco and Spain putting up missing child posters with my own son’s image staring back. Sometimes tourists would stop and look and I’d go up and say ‘Sorry, that’s not real, it’s my son.. It’s a film’ and they would look at me like I’m crazy, and they are probably right. I was crazy to do this! Of course I also had to entertain an audience so I felt that some more traditional twists should come into the situation. That side, of course less realistic but I had to balance it out and try and give audiences a rounded experience.

-PH: What was it about Angela that made her the perfect choice for the movie?

-Howard: Angela Dixon was the only actress I knew that had the talent and physical ability and was of the age group I wanted. She went through so much stress and dug so deep for this part that it started to make her ill for real. She is really living what you see on screen. Now since NLG has come out her performance has been called ‘Oscar Worthy’ and ‘The most important female role of the cinematic year’ – she deserves all of this praise and what you get with Angela when you watch Never Let Go is a character, not a celebrity so I hope that adds to it’s realism.

-PH: Can you imagine the flick being made twenty years ago? How different would it be?

-Howard: It would definitely have been a man fighting to take back his child! It would also have one-liners and would probably not be anywhere near as gritty. I’m not saying NLG would be better. It would be different. I also think the modern perspective on the locations I shot in make it feel different now. People are sadly more fearful of all sorts of things now. I’m very curious to see if people support the film as it is so female driven. IF they do, there will be more to come…

-PH: You’re very fond of the genre. What is it about thrillers that keeps you coming back?

-Howard: I do love thrillers. I also like journey movie’s – I was very influenced by the amazing Sergio Leone. I like to take my audiences to places they might not be used to seeing in a particular plot. (Hence Africa and India on our ‘The Dead’ Movies)  I also appreciate suspense and as a film goer I want my heart rate to increase sometimes! I want to take you on a ride both emotionally and physically and I thank everyone who joins us on the journey of Never Let Go – you might be surprised where it might take you!