\ˈdȯ-gəd\
“Having or showing the attitude of a person who wants to do or get something and will not stop trying : stubborn and determined” 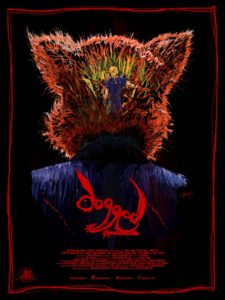 “When ten year old Megan Lancaster meets a grizzly and untimely end, Sam is forced to return to the remote tidal island where he grew up to attend the funeral.

A testing relationship with his disconnected parents, a reunion with his estranged girlfriend Rachel, and a cryptic message from the island’s doctor force Sam to investigate the events leading up to Megan’s tragic death.

The truth is far more shocking and unbelievable than Sam wants to acknowledge, and his life begins to spiral out of control in a macabre descent of paranoia.

Sam must race against tide and time to expose the seedy underbelly of the island – and to save the lives of those he loves.”

“Dogged” is the debut feature film from director Richard Rowntree. A disturbing folk horror film which taps into our primal fear of what lurks in the woods. 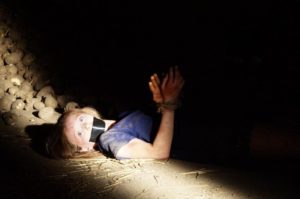 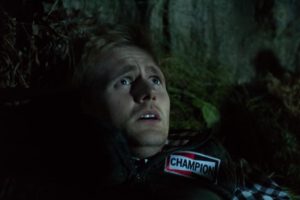 Why horror for your first feature?

There’s several reasons I chose to make my debut feature film within the horror genre. Firstly, the core crew (myself included) are all huge horror fans – we felt that the genre was largely devoid of intelligent, original and psychological horror elements – and we wanted to make the kind of film that we, as an audience, would want to engage with. Secondly, the old adage of horror being an easily accessible genre for micro-budget filmmakers came into play. We knew what our capabilities were, and we also knew what our restrictions would be given our extremely limited budget. So we harnessed our creative ideals and used everything possible to our advantage – from creepy locations to convincing props, to stand-out performances from our cast. Finally we were aware of the current rise in popularity of the so-called sub-genre of “folk horror”, one which lends itself perfectly to remote rural locations and character driven stories – and, perhaps, more discerning, mature audiences who feel a waning affinity with the genre and need re-invigorating. With the current political climate, I also felt that this story was a great way to subtly explore themes of isolation (Brexit), dictatorship (Trump) & that feeling a lot of people have in this day & age of being helpless in the face of mass delusion & skewed ideals.

How did you adapt a 4 minute micro-short into a full length feature film?

When we made the micro-short, it was always meant to be a small snippet from a much bigger story(as with all of our short films). As the short entered the festival circuit, our minds were whirring with different ideas about the expansion – often with very different origins and conclusions. When we had agreed on the most fitting of these, Matt Davies (co-writer) and myself sat down and thrashed out 19 drafts of the feature script over a period of several months before we were happy with the outcome. The short was visual story telling in its simplest form – and the feature combines this with a very character driven script which focuses on the psychological aspects of horror rather than relying on the cheap and overused jump scare approach of so many modern horror films. It’s far from generic!

What makes this different from other films?

Falling into the re-emerging “folk horror” sub-genre, “Dogged” is a hybrid of both classical films from an era when horror attempted to branch out and explore the horrors of rural settings, deeply entrenched with folklore and mysticism, and more recent psychological horror and its’ subtle symbolism and character driven storylines. With a dark fairy tale inspiration, it draws on aspects of the horror of environment and establishment rather than aiming for lowest common denominator of scares.

How long did it take to shoot?

Principle photography was 18 days from the end of August through to early November 2016, with one pickup day in January 2017. The film was shot over successive weekends on a variety of locations, utilizing an entirely volunteer cast & crew.

The core crew of the film are primarily industry professionals who have contributed a great deal to the films of other people over a number of years. In 2014 we decided to branch out and make our own films. With six shorts under out belt in two years, we felt it was a “now or never” situation – if we didn’t take that leap and try to make a feature, we’d forever be stuck in limbo out knowing if we couldn’t do it. Once our crowdfunding goal was reached, we had to kick production into action, and follow through with our promises to the best of our abilities. Every single person who worked on the film from day one gave their all to create something we believe to be truly unique.