Bring in the clowns… 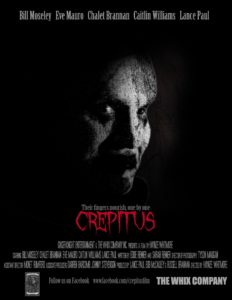 Heavyweight Pennywise the dancing clown broke box office records and once again, horrified people worldwide. However, just around the corner is another, equally terrifying clown named Crepitus and despite sharing the same diet with Pennywise, that’s were the similarities end. When Crepitus is done eating, there’s nothing left to float.

This is Haynze Whitmore’s directorial debut for a feature film and was shot entirely in Cheboygan, MI and is expected to be released this fall. 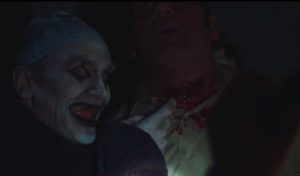 The screenplay was written by Eddie and Sarah Renner.

14 years after Bill Moseley starred as Otis in Rob Zombie’s House of 1000 Corpses, alongside Sid Haig who played the iconic Clown, Captain Spaulding, it is now Bill’s turn to take the reigns as a clown. This time as an immortal, child eating clown named Crepitus.

Synopsis:
Seventeen year old Elizabeth and her younger sister Sam are thrust into circumstances more terrifying than life with their abusive, drunken mother when they are forced to move into their deceased Grandfather’s house. Frightened beyond belief, they are forced to learn horrible things about their family history. Never mind the ghosts in the house, there is something far worse that takes an interest in them … a cannibalistic clown named Crepitus.

(GKE) was built on their managing partners buzz and success. Producing Partner Lance Paul’s past films he helped produce “Realm of Souls”, “Buried Cain”, Creature Feature” and “Dark Roads 79” are all different stages of Global distribution. GKE is now putting their efforts into this production venture with the intention to produce a feature length motion picture entitled “CREPITUS,” staring Bill Moseley.