Works by Stephen King feature heavily this month on Horror Channel, which celebrates the icon’s 70th year as one of horror’s most prolific and popular authors. There are network premieres for his fearsome feline anthology CAT’S EYE, starring James Woods & Drew Barrymore; his darkly weighty cautionary tale STEPHEN KING’S THINNER, directed by Tom Holland in his directorial debut; the science-fiction action horror MAXIMUM OVERDRIVE, starring Emilio Estevez; and the 2009 adaptation of his short story CHILDREN OF THE CORN.

Horror Channel has eleven film premieres in October, including the UK premieres of SOUTHBOUND, a chiller compendium from the creators of the V/H/S franchise; Mitch Wilson’s gruesome hell-ride KNUCKLEBONES; and Declan O’Brien’s twisted take on the Outback slasher franchise, WRONG TURN 5: BLOODLINES.

Three shocking Stephen King short stories are linked by a stray cat that roams from one tale to the next. First, Dick (James Woods) is trying to quit smoking by any means necessary — even joining a shady self-help group. Next, Johnny (Robert Hays) is an adulterer forced by the wronged husband to circle a building’s hazardous ledge. Lastly, Amanda (Drew Barrymore) is threatened by an evil gnome who throws suspicion on the family cat.

Get ready for more backwoods gory mayhem as a sudden and mysterious inheritance brings Danny (Anthony Ilott) and his friends to Hobb Springs, a forgotten resort deep in the West Virginia hills. Hobb Springs is being looked after under the watchful care of Jackson and Sally, a socially awkward couple who introduce Danny to the long lost family he’s never known. Soon, Danny is forced to choose between his friends and his bloodline.

After a comet causes a radiation storm on Earth, machines come to life and turn against their makers. Holed up in a North Carolina truck stop, a group of survivors must fend for themselves against a mass of homicidal trucks. A diner cook, Bill Robinson (Emilio Estevez), emerges as the unlikely leader of the pack, attempting to find an escape plan for himself and the survivors.

Alexandre Aja’s remake of Wes Craven’s 1977 original centres on a family who becomes stranded in a barren US atomic zone. They soon discover, to their horror, that the wasteland is far from uninhabited. A band of bloodthirsty mutants prowls the area, and there is nothing they like better than fresh human meat.

Billy Halleck (Robert John Burke) is an obese lawyer who accidentally hits a gypsy with his car. Given Halleck’s influence in town he manages to brush the incident under the rug with some unethical legal help. However, the victim’s father, Tadzu Lempke (Michael Constantine), places a curse on him and he starts to lose weight at an alarming rate. Then, events become even more macabre.

It’s Valentine’s Day in a tiny mining town in Nova Scotia, and, for the first time in two decades, the residents are planning a holiday dance, defying an old folk tale surrounding a deranged murderer killing those who celebrate Valentine’s Day. True to legend, bodies begin piling up, setting the scene for a tale of monstrous revenge and a climactic chase through the mines.

During a routine patrol of the New Mexican desert, members of a National Guard unit (Michael McMillian, Jessica Stroup & Daniella Alonso) stop at a deserted research camp. Picking up a distress signal coming from a mountain range, they set out to investigate, unaware that a tribe of vicious, cannibalistic mutants awaits their arrival… 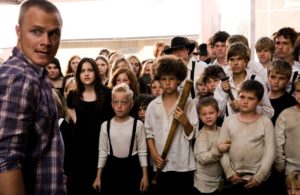 As physician Burt Stanton (David Anders) and girlfriend Vicky (Kandyse McClure) drive across the American Midwest to his new job, their trip comes to a sudden halt when they encounter the body of a murdered boy in the road. Trying to contact the authorities, Burt and

Vicky wander into a small town populated only by children. Soon they realise in horror that the youthful fanatics want to sacrifice them to their demonic deity. 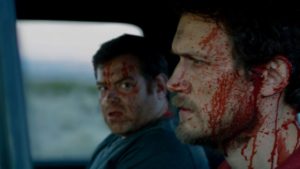 Five interlocking tales of terror follow the fates of travellers who confront their worst nightmares over one long night on a stretch of desert highway. There are two blood-soaked men on the run from supernatural horrors, an all-girl band taken in by a strange family, a man who has to perform emergency surgery with spooky 911 assistance, a home invasion and a rescue mission that goes horribly awry. The Crypt Keeper would be so pleased! Directed by Roxanne Benjamin, David Bruckner, Patrick Horvath and Radio Silence.

When a group of bored friends come together for a night of fun they dare each other to draw a pentagram and perform an ancient rite. Then they stumble across an antique dice game of chance made from human knucklebones. Their first instinct is to roll them gruesome bones. Their second instinct is to run for their lives when they summon up a murderous demon…
TV: Sky 319 / Virgin 149 / Freesat 138 | Freeview 70
www.horrorchannel.co.uk | twitter.com/horror_channel | facebook.com/horrorchannel