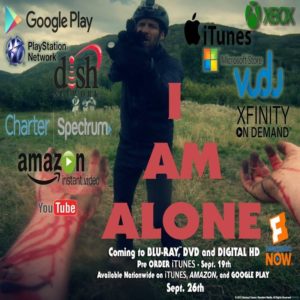 Random Media and Abstract Forces Productions announce the DVD, Digital and VOD debut of the award-winning independent film festival favorite, I AM ALONE, beginning September 26, 2017. When an unknown virus begins to spread through the population infecting people almost instantly, the CDC discovers a lone TV survivalist host’s resistance.The CDC tries to piece together why the Zombie-inducing virus has taken longer to transform the journalist than others, reviewing the events of the previous days through footage to learn more, in hopes of a cure.

I AM ALONE was beautifully filmed in the mountains of Montrose, Colorado, with the help of a groundswell of support from local filmmakers and townspeople who assisted in the dramatic production. Starring Gareth David-Lloyd, Gunner Wright, Marshal Hilton and Rory Zacher, it is directed by noted Horror genre veteran Robert A. Palmer. Acclaimed as featuring ‘both gusto and hook’ (Screen Relish) in its festival run, the film won ‘Best Zombie Movie’ in both the Dead Walk Film Fest (2016) and Fright Night Film Fest (2015); as well as also netting ‘Best Actor’ accolades for Gareth David-Lloyd in those festivals AND Scare- a-Con (2015) and Mac Horror Festival (2015), among other awards.

I Am Alone Festival Trailer from Abstract forces on Vimeo.

Logline: When an unknown virus begins infecting the local population almost instantly, the CDC uncovers footage of one man, a survivalist and TV journalist, who is only slowly affected and whose footage just may be able to help them find a cure.

Full Story/Synopsis: Jacob Fitts, television host and survivalist, with his crew producer Adam Levine and cameraman Mason Riley set out to shoot another episode of their popular survival show, I Am Alone. Episode 413 takes us deep into the Colorado Rockies where Jacob will be left alone for seven days while his team sets off into town to capture footage and shoot interviews.

Within hours a viral outbreak spreads rapidly across the globe. Unaware of this outbreak, Jacob, isolated and alone, continues shooting his television show. As day one comes to a close, Jacob is attacked and bitten by an infected person. As the virus spreads through the town, Mason and Adam have to fight the infected to save their own lives.

With the CDC monitoring the outbreak, they pick up Mason and all his footage and bring him back to base for questioning. Reviewing Mason’s footage the CDC tries to piece together why the virus has taken longer to transform Jacob. The CDC forces Mason to relive the events of the previous days through his footage to learn more about the virus and Jacobs survival.

Directed by: Robert A. Palmer

Written & Produced by: Michael A. Weiss & Robert A. Palmer

Released by Random Media, I AM ALONE is an Abstract Forces Production. The film has a running time of 88 minutes and is not rated.

About Random Media:
Random Media is a content company that acquires and distributes films on a worldwide basis through movie theatres, conventional brick and mortar retailers, digital platforms, cable and satellite companies and television networks. Random Media’s library includes such acclaimed films as Escape From Tomorrow, The Visit, Meth Head, Desert Cathedral and Killswitch: The Battle To Control The Internet.